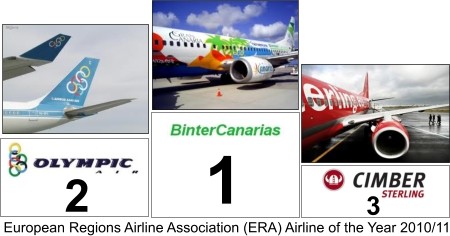 Binter Canarias has been announced the winner of the European Regions Airline Association (ERA) Airline of the Year 2010/11 GOLD Award.  The carrier has previously won three ERA awards, including the ERA GOLD Award in 2005.

The SILVER Award went to Greek re-launch carrier Olympic Air, while the BRONZE Award was won by Cimber Sterling of Denmark.

Binter Canarias impressed the judges for its team focus and strong brand – an airline totally in symbiosis with its market.  It also won praise for its strong financial situation and remarkable positive growth in spite of the economic crisis in Europe, resulting from a clear business development strategy.  Its standardised fleet was regarded as providing great operational and economic benefits.  Finally, it was lauded for its innovation, focus on customer service quality, and its effective use of IT including social networks.

Silver winner Olympic Air was commended for having been re-launched by a passionate management team, led by ERA President Antonis Simigdalas, against a backdrop of a troubled past and an extreme economic crisis in Greece.  Within two months of starting operations, the airline was operating 190 daily flights.  It has also brought its major competitor, Aegean Airlines, to the negotiation table to agree a merger.

Bronze winner, Cimber Sterling, winner of last year’s Silver Award, caught the judges’ attention this year for its securing of an IPO during very challenging market circumstances, gaining new capital to finance its rapid expansion and successful migration.  It has achieved impressive ASK and RPK growth while facing tough competition from “low fares” operators.  The airline has added 40 new destinations and improved its brand recognition from 38% to 98%. It has also used its new-found size to act in an industry capacity, for example performing test flights during the aftermath of the Icelandic volcano eruption.

The ERA Airline of the Year is judged by an independent panel comprising senior statesmen of the industry and respected representatives of aviation media from a variety of European countries. 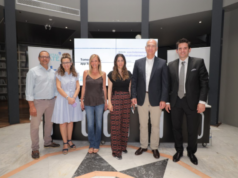 The 4th edition of “The Digital Gate IV: The Airport Innovation Challenge” is here! 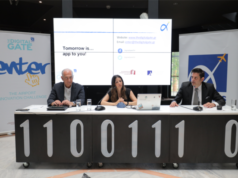