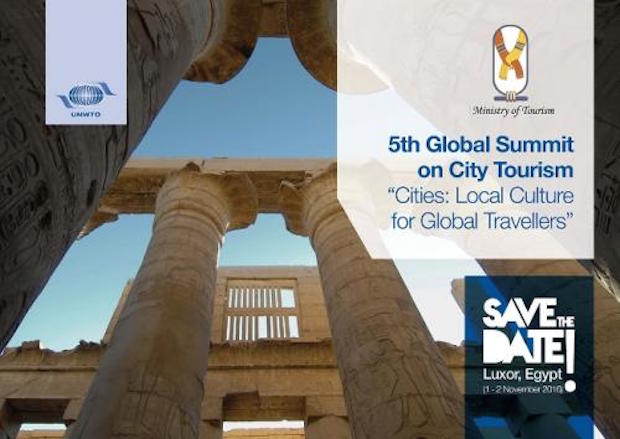 The World Tourism Organization (UNWTO) and the Government of the Arab Republic of Egypt are organizing the 5th Global Summit on City Tourism: “Cities: Local Culture for Global Travellers” on 1-2 November 2016 in Luxor. During the summit, UNWTO will launch the Mayors for Tourism Initiative.

Tourism has become a central component of the economy, social life and geography of many cities in the world and is ideally positioned to seize the opportunities provided by urbanization. Yet many challenges are emerging, including the need to effectively manage the growth of tourism in many cities around the globe.

The development of clusters that engage public and private players from all sectors is central to the new paradigm of city tourism development, in which tourism needs to be a tool for social cohesion and cultural preservation, beyond its fundamental contribution to economic activity.

As part of the action plan of the UNWTO City Tourism Network, UNWTO will launch a new initiative gauged to gather mayors and decision makers in cities around tourism issues. The Mayors for Tourism Initiative aims to promote the important role of tourism as a driving force for socio‑economic development in cities, and place the sector as a priority in the urban agenda.

Mayors of world cities have been invited to share best practices in managing the challenges and opportunities that tourism presents to local administrations and to propose formulas to align their tourism‑related policies with those of national governments.

The Summit will be preceded by the 104th Session of the UNWTO Executive Council, taking place in Luxor on 30 October-1 November 2016.