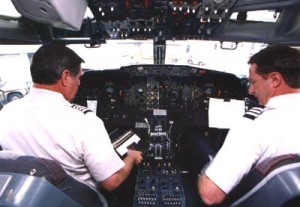 Airlines will need nearly half a million new commercial pilots worldwide by 2032 as they expand their fleets, an industry forecast released predicts.

Boeing, the Chicago-based airline manufacturer, said today that airlines will have to hire 498,000 pilots — about 25,000 each year — to support all the new aircraft they are expected to add to their fleets over the next two decades. They also will need 556,000 new maintenance technicians, or about 28,000 a year.

Boeing’s outlook, released today during the launch of the 787 flight training center at its campus here, predicts demand for pilots will grow in all regions except for Europe. The projected increase in pilot demand is greater than what Boeing had indicated in previous forecasts. It is particularly driven by airlines’ interest in single-aisle aircraft, the company said.

But other factors are coming into play, analysts say. Thousands of pilots are retiring this year just as the Federal Aviation Administration is introducing new rules requiring new training and more rest in between flights.

The FAA announced a new rule last month requiring co-pilots, or first officers, to get 1,500 hours of flight time for their certification, up from 250 hours.

Starting next year, the minimum rest period before a pilot’s flight duty will increase from eight hours to 10 and must include the ability to get eight hours of sleep in a row.

“The urgent demand for competent aviation personnel is a global issue that is here now and is very real,” said Sherry Carbary, vice president of Boeing Flight Services. “The key to closing the pilot and technician gap in our industry is enhancing our training with the latest, cutting-edge technologies to attract and retain young people interested in careers in aviation.”

The most pronounced shortage will be in the Asia Pacific region, where 192,300 pilots and 215,300 technicians will be needed, according to Boeing’s forecast.

Even though demand has declined slightly in Europe, the region still will need another 99,700 pilots and 108,200 technicians.

Analysts say the brunt of the shortage will be felt by regional carriers that operate half of the USA’s scheduled flights. They simply won’t be able to compete with the larger airlines.

“The major U.S. airlines are just beginning the longest and largest pilot hiring binge in history, and the ‘wake turbulence’ will be very disruptive to smaller flight operations who feed them pilots,” says Louis Smith, president of FAPA.aero, a company that provides career and financial advice to professional pilots.

The pool of qualified candidates is drying up for everyone, says Robert Mann, president of airline consulting company R.W. Mann & Co. in Port Washington, N.Y.

The industry has historically hired former military pilots, he says.

“These days the military is short of pilots, not mustering them out, like in the post-Vietnam years through the 1980s,” he says.

Meanwhile, the number of people willing to deal with the liability insurance and fuel and maintenance costs for a plane has declined.

All that, he says, has made getting a pilot’s license “a huge expense, and the number of flight schools has likewise declined.”

Poor wages also have not helped to attract qualified candidates, he says.

Katie Connell, a spokeswoman for Airlines for America, which represents the industry, disputes that there is a lack of qualified candidates.

“Long-term projections about pilot hiring are inherently subjective as they are based on assumptions about airline growth that have often proved to be faulty,” she says. “We expect the major commercial airlines will be appropriately staffed, and are not expecting any shortage within the next few years.”