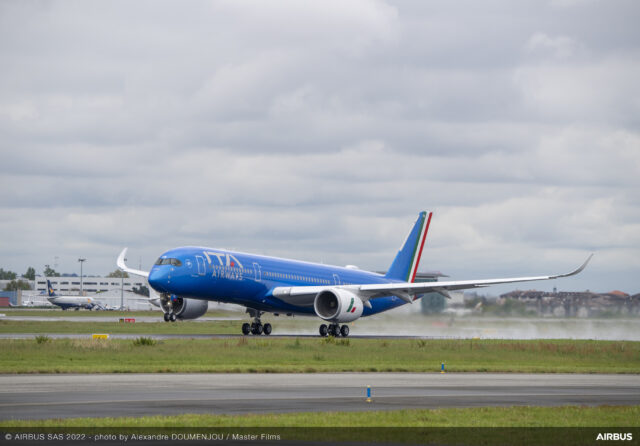 Compared to 2022, the development of the fleet will determine a 73% capacity increase in terms of seats offered per km (Available Seat Kilometre – ASK) on the entire network. An increase mainly driven by capacity on long-haul routes, which will grow by 107%.

In fact, new intercontinental destinations are expected to open in 2023, with direct flights operated from Rome Fiumicino to San Francisco and Washington in the United States starting from the summer season, and to  Rio de Janeiro in South America from November, besides the confirmation of all long-haul connections launched in 2022.

With the entry in fleet of the A321Neo aircraft, ITA Airways will also plan the opening of new destinations in the Middle East: Riyadh, Jeddah and Kuwait City, expanding its network and strengthening its connectivity through its Rome Fiumicino Hub. The increase in the number of destinations in ITA Airways network demonstrates the Company’s commitment to becoming the reference operator for the mobility of Italians, through the achievement of two fundamental objectives: the satisfaction of all customers’ needs – always at the core of the Company’s business – and the growing increase in profitability.

The expansion of the fleet represents a further step forward in ITA Airways’ growth strategy which will lead the Company to be the greenest airline in Europe in 2026 with 80% of the fleet made up of new generation aircraft, leading to the consequent reduction of 1.3 million tonnes of CO2 emissions. By the end of 2023, the Company will have 50% of new generation aircraft, for a total of 96 aircraft in the fleet, thanks to the arrival of 39 aircraft, including 9 for the long-haul.

Just over a year after the start of flight operations, ITA Airways demonstrates that it has fulfilled its growth commitments for 2022 and laid the foundations for a further increase in its market presence, reaching a wide range of intercontinental, international and domestic destinations.