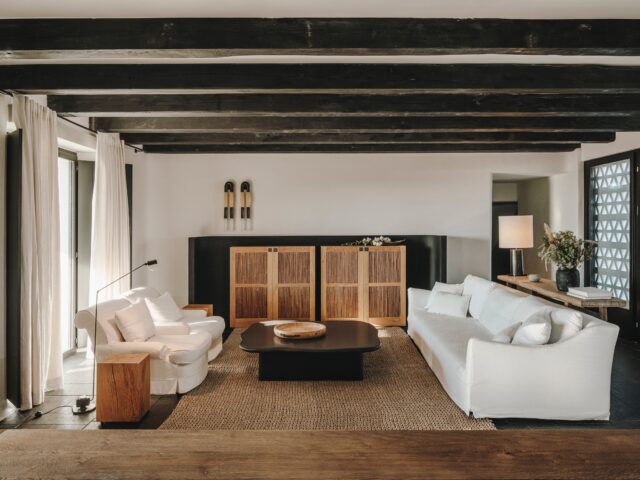 –The hotel has obtained two Gold awards in the 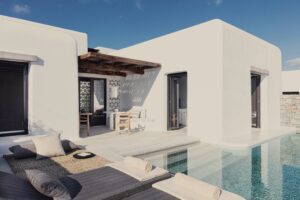 Kalesma Mykonos was honoured with two distinctions at this year’s Greek Hotel of the Year awards, proving that it stands out for its Cycladic aesthetics, its unique architecture as well as its excellent gastronomy. The irresistible combination of discreet elegance fused with traditional elements and the signature of K-Studio and Studio Bonarchi’s Vangelis Bonios, showcased Kalesma as the best Boutique Hotel for 2022. With an emphasis on Greek cuisine and fresh ingredients, chef Kostas Tsigkas curated Pere Ubu Mykonos’ menu, deservedly winning the gold award for the hotel in the Fine Dining Hotel category. The awards ceremony was held on Wednesday, 30 March with two of the owners, Sofia Kousathana and Aby Saltiel, collecting the awards on the hotel’s behalf. 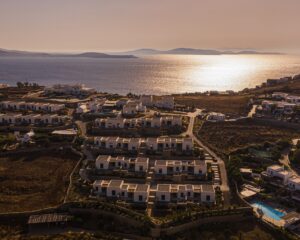 Kalesma Mykonos is a boutique hotel designed to resemble a summer home on Mykonos, brimming with warmth and good company. After all, the owners’ philosophy relates to the feeling of authentic Mykonian hospitality they want guests to experience from the moment they first arrive until the day of their departure. The new one-bedroom villas, in operation from this year, ensure absolute privacy and comfort as well as a space within which guest can enjoy premium services, such as private dinners and al fresco barbecues, with views to the infinite blue sea. The land’s energy is apparent throughout the hotel as K-Studio and Studio Bonarchi’s Vangelis Bonios’ design team have managed to perfectly capture the allure of old Mykonos in both interior and outdoor spaces with modern aesthetic finishes.

The epitome of fine dining meets incredible views of Delos 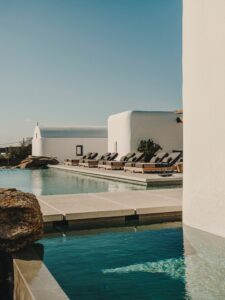 Pere Ubu Mykonos with chef Kostas Tsigkas at the helm, is a frontrunner in Mykonos’ gastronomic scene. Dishes bursting with imagination, colour and the unmistakable aroma of Greece adorn the island throughout the day while refreshing cocktails and premium wines provide the perfect pairing to all meals. The unrivalled views of the pool and the Aegean Sea are some of the restaurant’s visitors’ favourite elements while Pere Ubu Mykonos’ musical evenings are provided by Yannis Mitsokapas and Zucca Radio, transporting guests to the rhythm of the Cyclades.

In the context of the awards, Mrs. Sofia Kousathana, said: “It is with great enthusiasm that we receive these two very important distinctions, proving that Kalesma Mykonos and Pere Ubu Mykonos stand out for the authentic Mykonian hospitality they offer guests as well as our chef, Kostas Tsigkas’, unique gastronomic approach in curating our menu, highlighting Greek cuisine and offering us the Best Fine Dining award. We would also like to warmly thank the design team of K-Studio, Studio Bonarchi and Vangelis Bonios for the wonderful architectural and interior design respectively, perfectly capturing the landscape’s energy.” 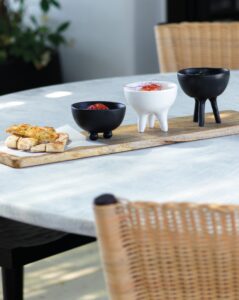 Respectively, Mr. Aby Saltiel added: “Through the creation of Kalesma Mykonos we wanted to make guests feel at home. A summer home on the island full of friends and warmth. With the help of K-Studio and Studio Bonarchi’s Vangelis Bonios who curated the architecture and interior design, we managed to breathe life into our vision and ultimately, gain this distinction. I would like to thank chef Kostas Tsigkas for highlighting the beauty of Greek cuisine in his Pere Ubu Mykonos dishes.”