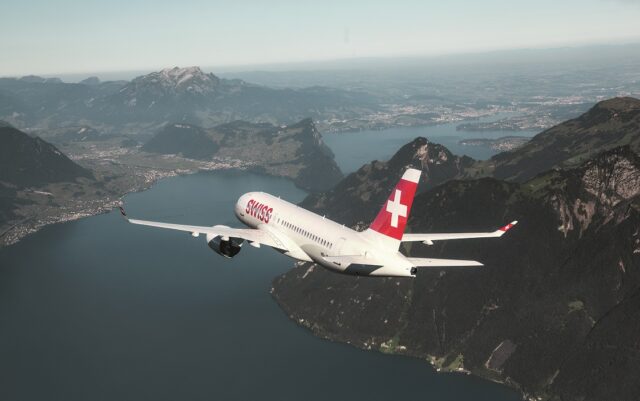 With the seasonally stronger summer months and sizeable cost savings, SWISS was able to achieve a marginally positive Adjusted EBIT of CHF 6.7 million for the third quarter of 2021 (Q3 2020: CHF -148.3 million). Total revenue was up 91.0 per cent on the prior-year period at CHF 707.8 million (Q3 2020: CHF 370.5 million). The operating loss for the first nine months of 2021 was reduced accordingly, to CHF -391 million (Q1-3 2020: CHF -415 million). The actions initiated under the current restructuring are having
their effect.
The coronavirus pandemic depressed earnings at Swiss International Air Lines (SWISS) in the first nine months of 2021, too. Following an extremely challenging winter period, however,
spring 2021 saw a slight recovery in demand which then strengthened in the summer months.
Marginally positive Adjusted EBIT for the seasonally strong third quarter SWISS witnessed a significant increase in air travel in the traditionally strongest third-quarter period which, thanks to a certain catch-up effect, extended into autumn. The company was
able to raise its summer-months capacities to 55 per cent of their pre-crisis levels, and was able to sell the additional production, too. Third-quarter revenue rose by 91.0 per cent as a result, from the CHF 370.5 million of 2020 to CHF 707.8 million. The combination of higher production and sizeable cost reductions enabled SWISS to report an Adjusted EBIT of CHF 6.7 million for the period (Q3 2020: CHF -148.3 million). The positive third-quarter earnings reduced the operating loss for the first nine months of the year to CHF -391 million (Q1-3 2020: CHF -415 million), even though the first two months of 2020 had been unaffected by the coming crisis. Total revenue for the first nine months of 2021 was some 11 per cent down on the prior-year period at CHF 1.37 billion (Q1-3 2020: CHF 1.54 billion). Very strong demand on the cargo front continued to partially make up for the weak passenger business. “We are delighted to have achieved a marginally positive earnings result for the third quarter of this year,” says SWISS CFO Markus Binkert. “We were able to both sell our increased capacities and further lower our costs over the summer months. But our third-quarter earnings
result is still substantially below its pre-crisis levels.” For seasonal reasons, SWISS will be unable to emulate these positive quarterly earnings in the current fourth-quarter period, and the company expects to report a substantially negative earnings result for 2021 as a whole.

Restructuring measures initiated are having their effect
The actions taken under the ‘reach’ strategic restructuring programme to achieve recurring savings of some CHF 500 million are progressing according to plan. Five Airbus A330s have
been temporarily stored to downsize the long-haul aircraft fleet. A reduction should also be effected in the short-haul fleet by withdrawing older aircraft of the Airbus A320 family earlier than planned and deferring deliveries of new Airbus A320neo family aircraft. The number of aircraft of other airlines operating SWISS services on SWISS’s behalf under wet-lease agreements should also be reduced. Two further new Airbus A320neo aircraft will be delivered to SWISS this year.
SWISS CEO Dieter Vranckx says: “A lower cost base gives us greater flexibility in our revenue management and enables us to continue to ramp up our production as planned. We have set
ourselves ambitious goals to minimize the environmental impact of our business. We will only be able to achieve these from a sound financial foundation.”
SWISS’s liquidity also continues to steadily improve. The company now expects to utilize no more than half of its bank credit facility, and is also confident of repaying such loans ahead of their maturity. “The actions we have taken under our restructuring are having their effect, and we are on track to overcome the crisis. With the revival in air travel worldwide, which has been further boosted by the announcement that the USA is opening up again, we now expect to be able to raise our capacities next year to at least 70 per cent of their pre-crisis levels,” says CFO Markus Binkert.
Strong passenger growth in the summer months SWISS registered increases in its passenger numbers of 88.3 per cent for July, 123.7 per cent for August and 204.6 per cent for September 2021 compared to their prior-year periods.
Systemwide seat load factor for the third-quarter period amounted to 66.4 per cent, on capacity that was at 55 per cent of its pre-crisis level. Seat load factors on SWISS’s European network remained higher than those on its intercontinental routes, though the latter were still a substantial improvement on their 2020 levels.
SWISS1 transported 3.7 million passengers in the first nine months of 2021, some 15.2 per cent2 fewer than it had carried in the same period last year. A total of 35,264 flights were performed in the period, 14.6 per cent fewer than in January-to-September 2020. Nine-month systemwide capacity was 3.4 per cent down in available seat-kilometre (ASK) terms, while total traffic volume, measured in revenue passenger-kilometres (RPKs), saw a 23.7-per-cent decline. Nine-month systemwide seat load factor stood at 50.7 per cent, 13.5 percentage points below its prior-year level.