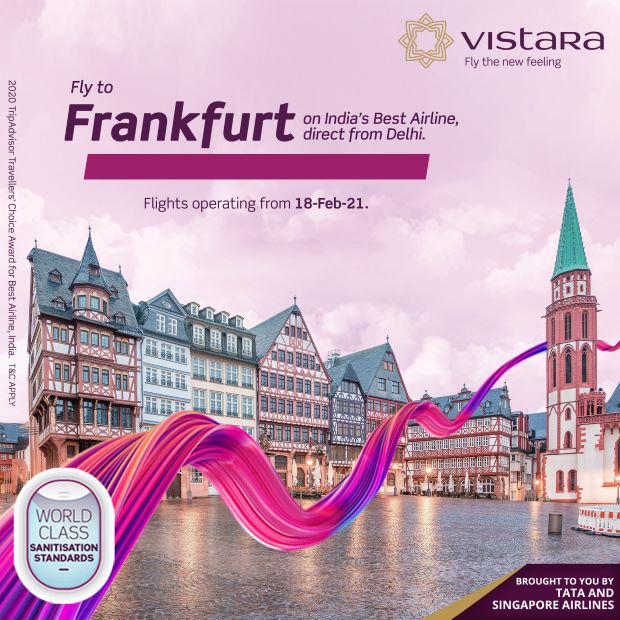 Vistara, announced special, non-stop flights between Delhi and Frankfurt from 18 February 2020. The airline will fly twice a week between the two cities, on Thursdays and Saturdays, as part of the ‘transport bubble’ formed between India and Germany.

The new route will be served by Vistara’s brand-new Boeing 787-9 Dreamliner aircraft, offering world class service and hospitality in Business, Premium Economy and Economy cabins. Frankfurt is Vistara’s second destination in Europe after London, United Kingdom. Subject to existing regulations around transit traffic, passenger can also travel via Frankfurt to rest of Germany and EU. Bookings for the flights are being progressively opened on all channels, including Vistara’s website, mobile app, and through travel agents.

Commenting on the importance of this new route in Vistara’s network strategy, Mr. Leslie Thng, Chief Executive Officer, Vistara, said, “As a key gateway to Germany and an ever-thriving metropolis that is a global hub of finance, commerce and trade, Frankfurt is another significant addition to our route network that also strengthens our presence in Europe. India and Germany enjoy very strong ties, the impressions of which are visible in many areas including business, science, and technology, that continue to fuel demand for travel between the two countries. Not only this, but Germany is also home to hundreds of thousands of Indians and people of Indian origin. Flyers from both India and Germany, will now have the choice of flying India’s best airline on this route that is trusted by millions of people for its world-class products, service and on-point hygiene and safety protocols.”

Customers flying between Delhi and Frankfurt will enjoy complimentary food and beverages in all cabins and cutting-edge in-flight entertainment covering 700+ hours of entertainment across films, TV shows, audio compilations and much more. Vistara is also offering complimentary Wi-Fi internet connectivity onboard, allowing customers to stay connected throughout their flight.

Since the outbreak of the COVID-19 pandemic, Vistara has taken several measures to ensure the highest levels of hygiene across touchpoints. This includes Vistara’s cabin crew wearing personal protective equipment (PPE) always and avoiding all non-essential interaction with passengers. Aircraft interiors are thoroughly disinfected after every flight using approved cleaning agents – a procedure that includes thorough sanitization of all surfaces such as seats, touchscreens, overhead bins, seatbelts, tray tables, galleys, etc. The airline has also introduced a new food & beverage service for all its customers, in line with the regulatory guidelines.

Vistara is India’s highest-rated airline on Skytrax and TripAdvisor and has also been the winner of ‘Five Star Airline’ and several ‘Best Airline’ awards. In a short span of six years since starting operations, Vistara has raised the bar for operations and service delivery in the Indian aviation industry by offering the world-class flying experience to travelers.