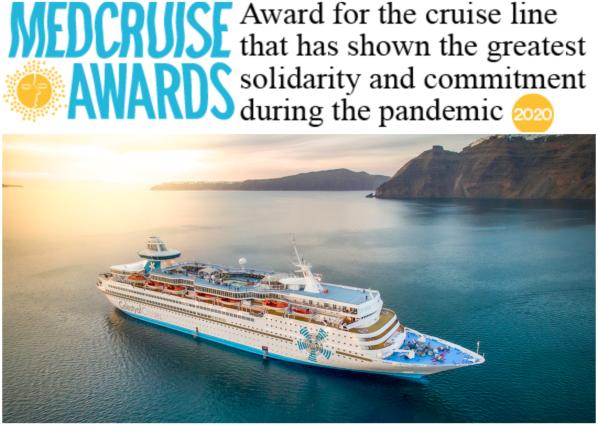 The company was presented with the first award for showing greatest solidarity during the pandemic and for its commitment to the development of the cruise industry, with emphasis on the Eastern Mediterranean.

Celestyal Cruises, the award-winning, number one choice for travelers to the Greek Islands and the Eastern Mediterranean, was honoured for the second consecutive year at the renowned MedCruises Awards, which aim to recognize excellence and innovation within the tourism and cruise industry. The company was awarded first place in the category “Cruise Line with the Greatest Solidarity and Commitment during the Pandemic’’, for its overall contribution to the local community, as well as to the industry as a whole, in light of the addition of a new vessel to its fleet during this critical period.

Celestyal Cruises’ support of vulnerable groups, the country’s healthcare staff and the health system showcases its solidarity with the national effort of addressing this unprecedented situation. Meanwhile, the addition of the new vessel to its fleet – now called Celestyal Experience – during this challenging period, proves the company’s commitment to help drive the cruise industry into a competitive future and stand out among leading tourism companies.

The CEO of Celestyal Cruises, Mr. Chris Theophilides said: “This is truly a great honor as it recognizes Celestyal Cruises’ efforts to support and offer relief to the socially vulnerable groups in our local communities within its means and capability. While going through one of the most difficult times in modern history, values such as solidarity matter the most. I would like to thank the entire MedCruise team for this honor and, in turn, pledge that we will continue with the same optimism and to help the cruise industry move towards a challenging and competitive future.”

The virtual awards ceremony, which took place on 11th August, 2020 and was organized by the MedCruise Association, offered hope to all its participants for the recovery of the industry by honoring the companies, organizations and individuals who work tirelessly to take the cruise industry into a competitive future.

MedCruise Awards 2020 comprises several categories with different juries made up of cruise industry experts, with some awards based on jury members’ opinion. The awards ceremony started with speeches by prominent MedCruise members, President Airam Díaz and Director of Partnerships and Events, Nicky Guerrero. This was followed by the announcement of the award winners accompanied by statements from members of the winning companies. Given the circumstances, it was not possible for the above members to be physically present, nor to carry out any further entertainment activity other than the music program of the Spanish artist Della Du.