Αρχική News in English More than 197m Travel & Tourism jobs will be lost due to... 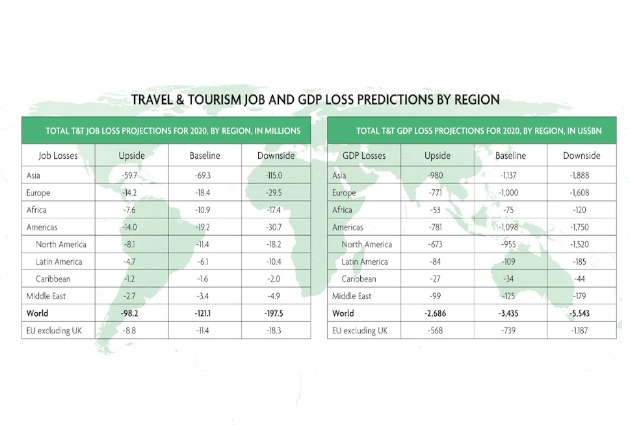 WTTC says Governments must act now to save the sector
29.5m jobs could be lost across Europe
Prolonged travel restrictions and lack of urgency will result in the loss of $5.5 trillion in T&T GDP
Worst-case scenario can be avoided if governments around the world follow four-point plan for recovery and start easing restrictions now, ahead of the summer

London, UK: More than 197 million jobs could be lost in the global Travel & Tourism sector if barriers to global travel, such as blanket anti-travel advisories and quarantine measures remain in place, according to new research from the World Travel & Tourism Council (WTTC).

The devastating figure comes from WTTC economic modelling, which looks at the impact faced by the Travel & Tourism sector amid local and global travel restrictions as a result of COVID-19.

In the worst-case scenario, where restrictions were lifted after the summer, the impact would be more significant, putting a total of 197.5m million jobs at risk. This represents an alarming 96 per cent rise from the most recent 100.8 million jobs WTTC had previously estimated to be under threat from the coronavirus pandemic.

The research shows that if these travel restrictions were removed sooner, it could save a staggering 99.3m jobs.

The impact of prolonged travel restrictions could also wipe out $5,543 billion in the sector’s contribution to global GDP, equating to a 62% percent drop compared with 2019.

Meanwhile, in the worst-case scenario, global international arrivals will suffer a sharp decline of 73% and 64% for domestic arrivals.

Gloria Guevara, WTTC President & CEO, said: “We are deeply saddened by the loss of so many lives and the devastating impact on families around the world because of the COVID-19 pandemic.

“This terrible virus has also had a crushing global socio-economic impact, which is threatening the jobs of millions of people who very livelihoods depend upon a thriving Travel & Tourism sector for their survival.

“Unfortunately, our new modelling reveals the depth of the long-term impact facing the global Travel & Tourism industry if travel restrictions continue for an extended period of time.

“Under our worst-case scenario, prolonged travel restrictions could put more than 197 million jobs under threat and cause a loss of more than $5.5 trillion to global Travel & Tourism GDP.

“The sector’s recovery will be delayed by heavy-handed restrictions just as it emerges from one of the most punishing periods in its history – in addition to the airlines, the entire travel ecosystem will suffer including millions of SME’s.

“Hotels, destinations, travel agents and others will all be devastated by the economic domino effect of prolonged restrictions on movement, plunging millions of travel businesses and their employees into financial ruin.”

WTTC, which represents the global Travel & Tourism private sector, carried out the extensive research this week and its expert analysis came up with three possible outcomes for the sector:

1. Worst-case scenario: Current restrictions starting to ease from September for short-haul and regional travel, from October for mid-haul and from November for long-haul.

In this scenario, 197.5 million jobs could be lost in the global Travel & Tourism sector, with a loss of $5,543 billion in global GPD. Meanwhile, global visitor numbers would drop by 73% for international arrivals.

2. Baseline scenario: Current restrictions starting to ease from June for regional travel, July for short-haul or regional travel; from August for mid-haul, and from September for long-haul.

In this scenario, a total of 121.1 million jobs could be lost in the global Travel & Tourism sector, with a loss of $3,435 billion in global GDP. Meanwhile, global visitor numbers would drop by 53% for international arrivals and by 34% for domestic arrivals.

3. Best-case scenario: Current measures starting to ease from June for short-haul and regional travel; from July for mid-haul and from August for long-haul.

In this scenario, a total of 98.2 million jobs could be lost in the Travel & Tourism sector, half the number in the worst-case scenario, with a loss of $2,686 billion in global GDP. Meanwhile, global visitor numbers would drop by 41% for international arrivals and by 26% for domestic arrivals.

While the best-case scenario would undoubtedly still result in a devastating blow for Travel & Tourism, this outcome avoids unnecessary additional harm to the sector as a result of prolonged travel restrictions and protects almost 100 million jobs around the world that could otherwise be lost.

This best-case scenario can still be achieved for the global Travel & Tourism sector if Governments around the globe follow WTTC’s recommended four-point plan.

Firstly, the immediate removal and replacement of any quarantine measures, with ‘air corridors’ to countries with similar circumstances to stimulate the Travel & Tourism sector and the global economy, as well as the removal of travel advisories and bans on non- essential international travel, which prevent insurance protection cover for travellers.

Secondly, the adoption of global health and safety protocols, such as the ‘Safe Travels’ initiative recently launched by WTTC, to provide assurance to travellers that enhanced health and hygiene measures are in place and that it is safe to travel again.

Thirdly, the implementation of a rapid test and trace strategy to help contain the spread of the virus, while still allowing people to travel responsibly at home and abroad.

And finally, greater, and sustained collaboration between the public and private sectors to ensure a coordinated global approach to the crisis.

Guevara added: “The health and safety of both travellers and those working within the sector are paramount. That’s why we have recommend the opening of ‘travel corridors’ between countries which have controlled the spread of the virus and provided immediate support for the entire Travel & Tourism ecosystem. This will be vital to kick-start the economic recovery and rebuild the livelihoods of millions of people.”

According to WTTC’s 2020 Economic Impact Report, during 2019, Travel & Tourism supported one in 10 jobs (330 million total), making a 10.3% contribution to global GDP and generating one in four of all new jobs.