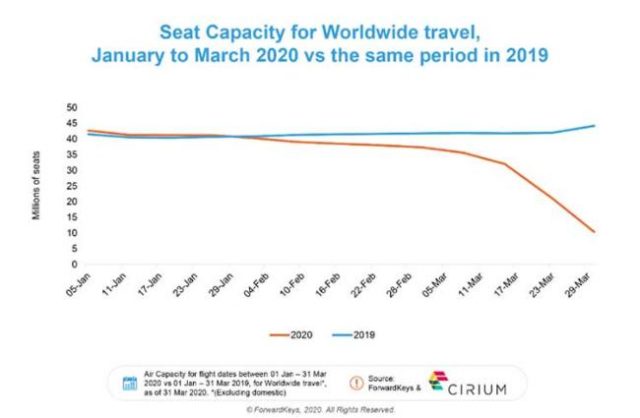 Analysis by ForwardKeys, the travel analytics company, reveals that the COVID-19 crisis has brought the aviation industry to its knees. This week (30th March – 5th April), international airline seat capacity fell to just 23% of what it was in the first week of April last year. Just 10 million seats were still in service, to facilitate essential travel, compared with 44.2 million a year ago.

Looking back over the first quarter of the year, airline seat capacity is 9.4% down compared with Q1 2019. (482 million seats were in service in Q1 2020, compared with 532 million in Q1 2019.) At the start of January, capacity was slightly up on last year. However, it started to fall during the last week of January, when the Chinese government announced restrictions on outbound travel. From then until the middle of March, air capacity fell substantially; at which point it fell precipitously to the end of the month.

The top ten airlines still operating in the first week of April (30th March – 5th April) are: KLM, with 800,000 seats still in service, Qatar Airways, with nearly 500,000 seats in service and Ryanair with 400,000. They are followed in descending order by Delta, Air France, American, BA, Wizz Air, Cathay Pacific and Jeju. However, this picture will change soon, as Ryanair recently announced that almost its entire fleet will be grounded by the COVID-19 outbreak. 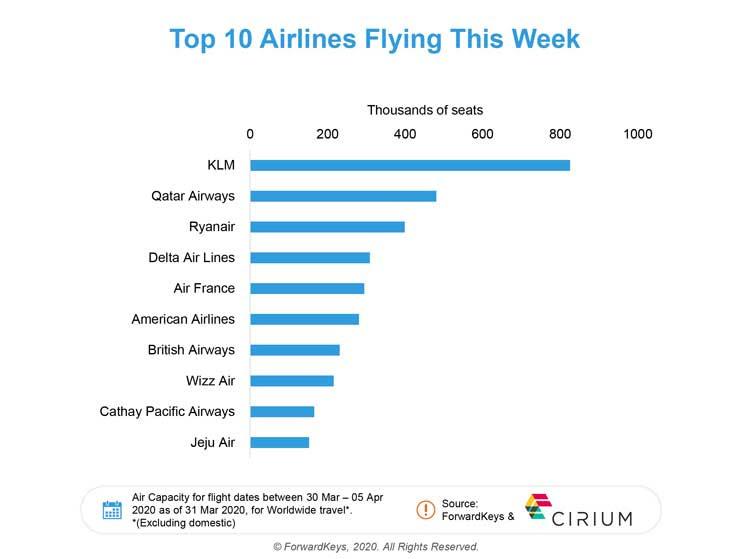 Olivier Ponti, VP Insights, ForwardKeys, said: “Governments have closed entire countries; and in response, the airline industry has cut services to the bone. It is likely that when we get to the other side of the pandemic, things won’t return to the vibrant market conditions we had at the start of the year, anywhere near as easily as some people imagine. By then, it is possible that a number of airlines will have gone bust; consumers will have lost confidence in flying and uneconomic discounts will be necessary to attract demand back.”