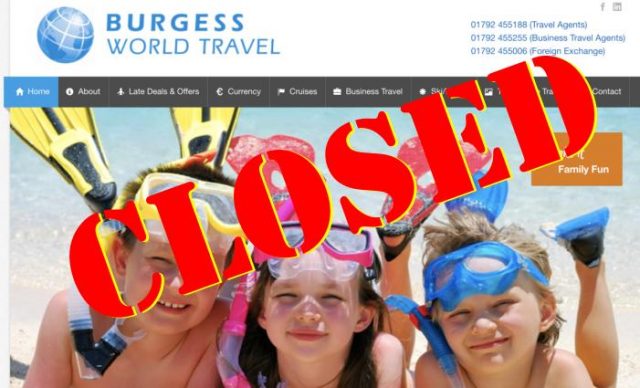 Swansea-based travel agency, Burgess World Travel, has closed down due to the coronavirus crisis.

The company was formed in 1991 and is owned by Jonathan Evans, who previously worked in finance for Lloyds Bank and American Express.

Speaking to TravelMole this morning, Evans said he was devastated that the current lockdown means he had to tell staff over the phone and that the team can’t go for one last drink with their loyal customers.

He said the company had already been struggling in recent years because of Brexit and because of ongoing roadworks in Swansea city centre which had hit footfall. He said the roadworks had taken longer than expected – two years now – after the repair company had gone bust.

The company was also hit in November by a devastating flood.

He said the agency was not able to take advantage of the government’s furloughed workers scheme, introduced to help businesses survive the coronavirus crisis, because it’s only a small team of eight people with one office.

“If we’d had another office, we could shut this one down and furloughed the other staff and operated from home. But because it’s just the one office, then we can’t just shut down the office and all hibernate for three months. We wouldn’t have been able to cope with handling all the refunds and cancellations during that time. The scheme works for larger companies but not for small ones.”

A message from Evans on the agency’s Facebook page says: “It is with much sadness, and having given it great consideration, that I have decided to close Burgess World Travel.

“I started work here in 1994 and became owner in 2008. I would like to thank all the staff who have worked here over the years, and in particular, my current staff, who have had to deal with some very trying issues these last few years.

“We’ve sold every currency under the sun, and transferred money to all four corners of the globe.
Our very successful Corporate Dept has arranged travel for clients based in South Wales, Slough, Sheffield and Devon.

“Finally, I would like to thank all our customers, many of whom have become friends for trusting in us over the last 30 years.

“Hopefully when lockdown ends, you are all welcome to call in an see us one last time. Thank you. Diolch yn Fawr.”