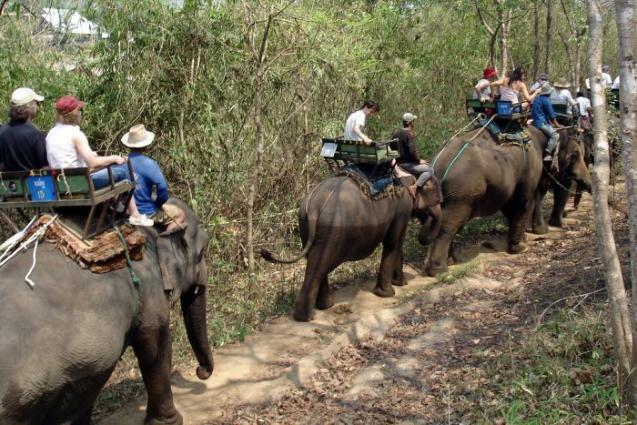 UK’s largest association has now labelled direct contact between tourists and elephants which also includes riding and bathing them as ‘unaccpetable’.

The Animal Welfare Guidelines has been update by Abta which remains applicable to all member tour operators and travel agents, Apart from outlawing elephant interaction without a barrier between  animals and tourists, the association further categorized feeding great apes, bears, crocodiles, alligators, orca, and sloths as “unacceptable”. Along with this feeding, contact and walking with wild cats was also outlawed.

In 2013, Abta’s original Global Welfare Guidance for Animals in Tourism was published but in 2018 a research report published by World Animal Protection revealed that some of the language used was vague and was considered inconsistent to protect animals being used for the purpose of entertainment.

In order to strengthen the guidelines for animals the association has since consulted with organization which includes World Animal Protection, Humane Society International, Born Free Foundation, World Cetacean Alliance, Whale and Dolphin Conservation.

After updation also the guidelines are still voluntary strengthen its guidelines for animals.

Julie Middelkoop, global campaigns lead at World Animal Protection said that the clear advice that it is unacceptable to use elephants for shows,rides, bathing or any other form of tourist contact without a barrier is a real breakthrough.

They were equally thrilled to see that other harmful tourist experiences like selfies with sloths in the Amazon, feeding orang-utans or giraffes and walking with lions in southern Africa have the same listing.

The emergence of new evidence and the thinking evolves on what constitutes a basic requirement or an unacceptable practice. The valid inputs from many expert stakeholders and the revised guidelines mean that the travel companies can implement the animal welfare approaches which reflects the latest evidence, work in partnership with suppliers to raise standards.

There is an increased awareness of the damaging impact the tourism industry can have on animal welfare.

Earlier, Trip Advisor had announced that it would stop selling tickets to attractions that use captive whales or dolphins.

Viator, the review site said that it was also serving all commercial ties with these attractions which do not get any revenue from them.

Over the subsequent few months, the changes were rolled out and the policy was expected to be in full force this year. It was not applicable to sea life sanctuaries that care for cetaceans already in captivity.