Αρχική Exhibitions Dynamic start to the new year for the Region of Attica at... 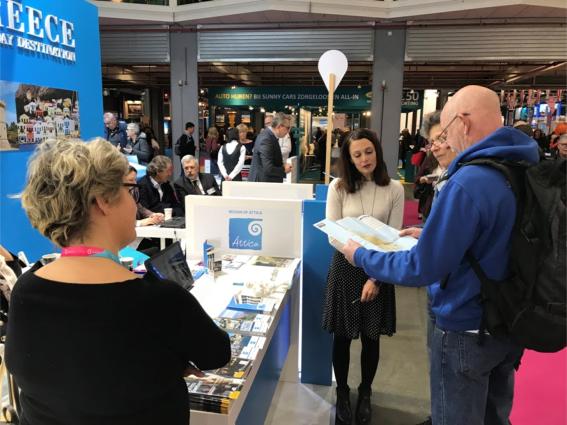 Maintaining the momentum gained at its recent roadshow in Holland and Belgium, the Region of Attica Directorate of Tourism participated successfully at the international tourism Exhibition “Vakantiebeurs 2019”, in Utrecht, from 9 until 13 January 2019, as co-exhibitor of the Greek National Tourism Organisation (GNTO).

At Hall 7, stand D010 of the Jaarbeurs exhibition centre, the Region of Attica executives and partners showcased the unique opportunities for memorable experiences offered in Attica, as a year round multidimensional collection of destinations. The exhibition audience and tourism professionals were thoroughly informed of Attica’s mature tourism products.

Attendance at the booth of the Region of Attica in Vakantiebeurs 2019 was substantial, all five days of the Exhibition. Particularly impressive were the interest and demand by the Dutch prospect travelers who are planning their forthcoming vacation, requiring additional information not only about Athens but also for the whole region of Attica. Visitors at the stand of the Region of Attica expressed increased interest on sailing, yachting, and island hopping in the Saronic Gulf.

Alongside the international tourism Exhibition “Vakantiebeurs 2019”, on Saturday 12 January 2019, the Region of Attica organised a thematic event on wine tourism and gastronomy, in a designated area within the GNTO stand, which showcased the wine routes and the historical vineyard of Attica. At the tasting that followed, the event attendants had the opportunity to savour the famous Attica variety of Savatiano, as well as delicious flavours of Attica gastronomy.

It is common belief that the highly successful participation of the Region of Attica at the Exhibition will further reinforce tourist flows from Holland to the whole of Attica this year.

The Executive Regional Councilor for Tourism Promotion, Ms Eleni Dimopoulou, stated: “We have been working systematically these last months, in order to boost the demand of the Netherlands’ significant tourism market for Attica. So far, all actions we have successfully taken in the Hague and in Bruges, as well as the recent articles published by Dutch tourism journalists who were hosted in Attica, indicate that in the forthcoming tourism period our efforts will pay off” .

Special thanks to Ms Eleni Skarveli, Director of the Greek National Tourism Organisation (GNTO) office in the Netherlands, and the executives of the GNTO Agency in Holland and Greece for their excellent cooperation with the Region of Attica Directorate of Tourism and the organisation of the GNTO presence in “Vakantiebeurs 2019”.