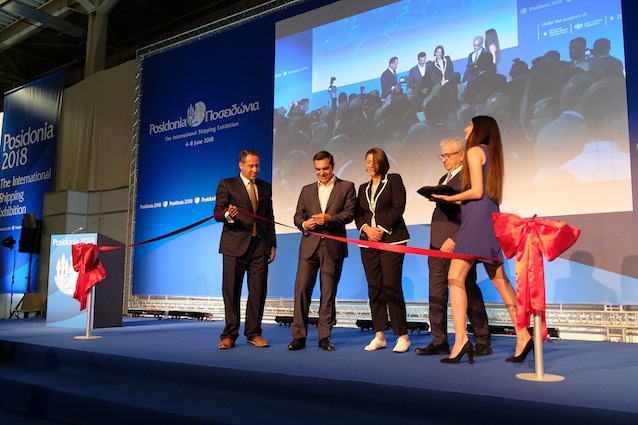 Greek Prime Minister Mr Alexis Tsipras presided yesterday evening over the official opening ceremony of Posidonia 2018, the world’s most prestigious biennial shipping event and one of the longest standing international maritime trade shows, which this year celebrates 50 years since its inception in the late 60’s.

Addressing an international audience comprising heads of states, European Union officials, Greek cabinet members, foreign maritime ministers, board members of the Union of Greek Shipowners, chairmen of international organisations as well as 1.500 VIP guests, the Greek Prime Minister said: “Greek shipping owns the largest international commercial fleet operating 20% of the global and 50% of the European capacity. This economic activity is responsible for a significant portion of the gross domestic product of Greece. It is worth noting, that the 2017 receipts from Greek shipping activity exceeded the Euro 9 billion mark, showing an increase of 20% compared to 2016.

“The Greek government is investing in infrastructure upgrades required by our shipping industry, while promoting initiatives which support the sector’s expansion in Greece as well as abroad. Our policy regarding the Greek ports, through selected partners who invest in their strategic growth – such is the case with Piraeus’ establishment as an international maritime hub, with the required structure and infrastructure – can further contribute to the country’s economic development and its position on the world map.”

The ceremony signalled the start of the global biennial maritime calendar’s most anticipated weeks which this year will see a record of 2,010 exhibitors from 92 countries welcoming some 22,000 maritime executives from nearly every country of the world. Amongst them thousands of delegates who arrive to Athens to attend the 40 plus programme of thought-provoking conferences, seminars and workshops, scheduled to take place at the Athens Metropolitan Expo Posidonia venue over the next four days.

The Secretary General of the International Maritime Organisation, Mr Kitack Lim, said: “We must ensure that the opportunities presented by modern ‘mega trends’ like digitalization, artificial intelligence and the so-called ‘fourth industrial revolution’ are carefully integrated into shipping, balancing the benefits against safety and security concerns, the impact on the environment, on international trade, and on the human element. Greece is one of the most influential IMO Member States. It has been continuously contributing to all aspects of the work of IMO, in its policy and technical issues. I would like to take the opportunity today to express my deep appreciation to the government of Greece and its shipping industry for its devoted participation and support.”

Commissioner for Transport, Mrs. Violeta Bulc, mentioned in her speech: “We have a responsibility to make sure that our shipping sector remains safe, sustainable, competitive that offers many good jobs both on-board and onshore. The EU is your partner all the way through and I hope we will continue working together on this path. I am certain that Greece’s long maritime tradition and richness of expertise will be an invaluable asset in our joint efforts to navigate the European maritime sector towards more prosperous routes.”

Mr Theodore Veniamis, President of the Union of Greek Shipowners, added: “Once again, Posidonia highlights the indispensable role and the multidimensional importance of shipping for the welfare of all nations. It also underlines the undeniable fact that our industry is the foundation for the development and growth of the wider maritime cluster.

“It is important that this is recognised by societies and lawmakers alike, as shipping is often held disproportionately responsible for meeting environmental standards compared to other industries. This stance is mainly due to a general awareness and understanding of its characteristics and the services it offers to citizens all over the world.

“I feel obliged, representing institutionally the world’s first shipping industry, to bring to your attention the fact that shipowners are only called upon to respond, with a high degree of professionalism, to the demand for maritime transport of the global trade, which is constantly growing due to the needs of modern societies. However, as shipowners, we have no say in the manufacturing of the ships’ engines, nor are we responsible for the quality of the fuels that we have to use. It is obvious that, while the links in the chain of responsibility are many, it has so far proved to be more expedient, at a political level, to solely focus on shipowners, a choice that is misguided and practically ineffective in the end.”

He added also: “However, the European Union’s world leadership in shipping should not be taken for granted. Without a competitive business environment, shipping as an international economic activity can neither survive nor can it progress. This is a fundamental principle that should not be overshadowed by policies of a horizontal application.

Like any maritime state, the European Union is called upon to ensure that its shipping industry remains competitive and therefore sustainable. This can be achieved through strategic planning with measures that support the sector’s international characteristics, thus allowing for the broad benefits of this entrepreneurial and productive pillar of the EU’s economy to be harnessed.”

In his conclusion, he stated: “In the presence of our foreign guests, I would also like to express my strong belief that the recognition of Greek shipping as a national asset, beyond political parties, with significant economic and strategic benefits for our country, is a true sign of political maturity and responsibility on behalf of our nation and the Greek State. It is also a testament to the sincere desire of Greek shipowners to maintain their close ties with their homeland and to help revitalize the seamanship of our nation.”

On behalf of the organisers, Theodore Vokos, Executive Director, Posidonia Exhibitions S.A., said: “This is the biggest Posidonia in the event’s 50 year-long history as over 2,000 exhibitors from 92 countries will participate. Posidonia’s continued growth reflects Greek Shipping’s global leadership position and its constant strive for excellence, by investing in highly qualified personnel, new technology and environmental friendly state of the art solutions for their fleet. The constant fleet renewal and diversification pursued by the Greek shipping industry serves as a confirmation that the Greek shipping community will continue operating the largest fleet for many years to come. Posidonia is now established as a unique policy forum where the leaders of the international maritime community can meet and debate the important issues that face the maritime industry”.

Posidonia 2018 will be held from June 4 – 8 at the Athens Metropolitan Expo. The event is organised under the auspices of the Ministry of Maritime Affairs & Insular Policy, the Union of Greek Shipowners and the Hellenic Chamber of Shipping and with the support of the Municipality of Piraeus and the Greek Shipping Co-operation Committee.