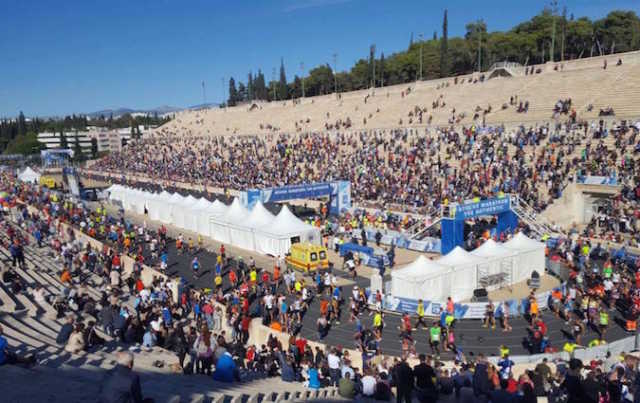 Over 50,000 athletes, this year, originating from 105 countries participated in the 34th Athens Authentic Marathon, this Sunday, which was dedicated to the memory of Grigoris Lambrakis.

Kenyan athlete Luka Rotis Loumpouan was the victor of the challenging 42.195 meter race.

Loumpouan finished the race as he entered the packed Panathenaic Stadium to the cheers of onlookers with the 15th fastest time in history, coming in at 2:12:49.

The first Greek to cross the finish line was Christopher Merousis who ended the race with a time of 2:24:58.

Crowds were enthusiastic, shortly before the race finished, the Greek athletics federation SEGAS and the Hellenic Olympic Committee had received Greece’s entire Olympic team at the stadium as part of an event held to mark the 120th anniversary since the first modern Olympic Games, which had also included the first-ever Marathon race.

The head of the team Lefteris Petrounias entered, carrying the Olympic flag, surrounded by fellow medallists Anna Korakaki, Spyros Gianniotis and other members of the team as soprano Sonia Theodoridou sung the Olympic Hymn.

This year’s marathon also included a marriage proposal, between a couple from Belgium that both ran the race together. Just minutes after they had both crossed the finish line, he pulled out a diamond ring, knelt down and popped the question, to enthusiastic applause from onlookers when she said ‘yes’. The couple later revealed that they already have three children but hadn’t made up their minds to “make it official” before this.