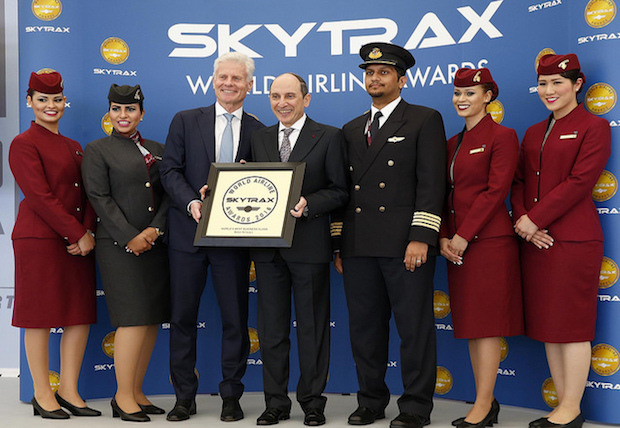 Air travellers chose Qatar Airways as the World’s Best Business Class in the 2016 World Airline Awards, also voting the airline top for Best Business Class Airline Lounge and the Best Airline Staff Service in the Middle East. The consumer-voted awards recognised the airline for its commitment to offering passengers an unrivalled travelling experience.

Qatar Airways Group Chief Executive, His Excellency Mr. Akbar Al Baker, said: “It is a very proud moment for Qatar Airways to be named World’s Best Business Class, Best Business Class Airline Lounge and Best Airline Staff Service in the Middle East by the prestigious Skytrax World Airline Awards, not only for myself, but for every individual at Qatar Airways who creates the passengers’ experience – from our on-board cabin crew to the chefs overseeing our catering, to the technicians who ensure the cabin is in perfect working order. Our commitment to continued success is unwavering and a testament to the dedication of our global teams. The airline’s renowned service, modern aircraft and luxurious cabins, combined with an expanding global network, continue to set Qatar Airways apart from the competition.”

The Skytrax World Airline Awards are widely known as the Passengers Choice Awards with millions of travellers, from 160 different countries, participating in passenger satisfaction surveys to decide the winners each year.

Commenting on the awards, Edward Plaisted, CEO of Skytrax said: “Qatar Airways remains a favourite amongst air travellers year-on-year and achieved strong results across many of the 2016 awards categories, ranking No. 2 in the world. The top prize for World’s Best Business Class is notable as this is amongst the most competitive in the customer survey. Airlines globally continue to develop and introduce new product and service concepts in Business Class and it takes a great deal of hard work to stay ahead in this market. The recognition of the Al Mourjan lounge as the world’s best is another great achievement for Qatar Airways.“

Over the last year Qatar Airways announced an unprecedented expansion of its network with 13 new destinations launching in 2016 including Adelaide, Atlanta, Birmingham, Boston, Chiang Mai, Seychelles and Sydney.

The airline continues to grow in 2017, and will commence services to further new destinations including Auckland, which will be the world’s longest flight, Lusaka, Skopje and Nice.

Qatar Airways, the national carrier of the State of Qatar, is one of the fastest growing airlines operating one of the youngest fleets in the world. Now in its 19th year of operations, Qatar Airways has a modern fleet of 186 aircraft flying to more than 150 key business and leisure destinations across six continents.