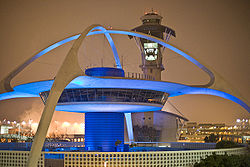 Los Angeles International Airport (LAX) has been voted one of the world’s most scenic airport landings in a poll of global travelers and travel industry experts coming in at number 9.  Conducted by PrivateFly, over 7,500 individual votes were received and a total of 115 different global airports received nominations.