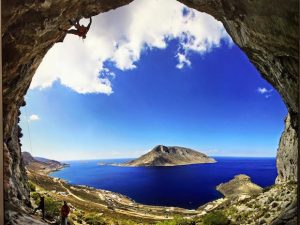 Kalymnos, the absolute alternative Greek tourist destination in recent years, took part in the Tour Natur Travel Fair 2015 in Düsseldorf, Germany from 04-06.09.2015, a tourism exhibition mainly dedicated to mountaineering, hiking & trekking, through the Pavilion of the Region of the Southern Aegean Islands. 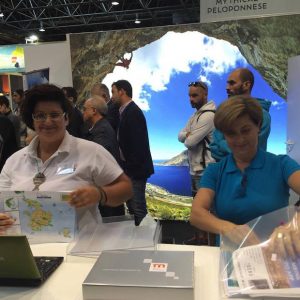 The Opening of the Pavilion was made by the Consul General of Greece in Dusseldorf, Mr. Gregory Delavekouras who won the respect of the entire Greek participation for his tireless presence.  Other Islands participating in the Pavilion beside Kalymnos, were Amorgos, Andros, Astypalea, Kea, Sifnos and Tinos.   Also present a great supporter of the effort, the Scientific Partner who is identifying, organizing and highlighting the Paths, not only of Kalymnos, Mr. Phoebus Tsaravopoulos, whose presence and technical support ensure the seriousness of the effort which started in 2013.
The dynamic presence of Kalymnos, which also represented Astypalea, within the Pavilion of the Region of the Southern Aegean Islands, was made because it was the only destination represented by two independent and simultaneously cooperating initiatives
a) The newly formed  Tourist Authority SYSTAS and
b) Alter Holidays DMC & Alternet Greece
Aiming through their participation to approach the promising German Market for trekking and hiking. The three-day exposure was intense work for the group from Kalymnos, informing  the public about the trails, presenting pictures, maps and privileged offers / packages to attract more visits to Kalymnos. Many contacts were made and requirements recorded for the standards expected from our destination  in order to claim a share of this promising market.
The initial participation of the Region of the Southern Aegean Islands was proven highly successful. The panel of Kalymnos in the backdrop, showing the unique nature of the island with its climbing trails and paths stole the impressions and was the ultimate surprise of the exhibition, therefore next year’s participation is in order already.