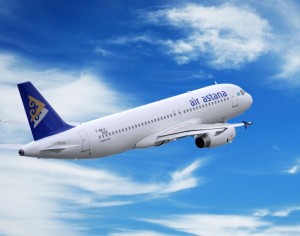 Air Astana, the Kazakhstan flag carrier, is celebrating success yet again at the 2015 Skytrax World Airline Awards, with Best Airline Central Asia / India being achieved for the fourth successive year and Best Airline Staff Service Central Asia/India for the third year. The awards ceremony took place at the 51st edition of the Paris Air Show at Le Bourget.
The Skytrax World Airline Awards are recognised throughout the world as a valued benchmarking tool that measures passenger satisfaction among business and leisure travellers, across all cabins (First Class, Business Class, Premium Economy Class and Economy class).
Air travellers were surveyed by telephone, questionnaires and online about their experiences with airlines on the ground and in the air over a 10 month period. The survey measured passenger satisfaction across a wide range of performance indicators of airline front-line product and service, including check-in, boarding, onboard seat comfort, cabin cleanliness, food, beverages, in-flight entertainment and staff service. The survey covered over 200 airlines, from the largest international airlines to smaller domestic carriers.
Commenting on the Award success, Peter Foster said: “We are delighted to have won the award for the fourth consecutive time, and would like to thank our customers for having voted for us. We do not take your loyalty for granted and we will continue to work hard to improve both product and service.”

This latest success comes as the airline celebrates its 13th anniversary this summer. Air Astana reported a record operating profit of US$97.7 m in 2014 representing a 35% increase over 2013.  It has also experienced increased traffic and network expansion over the past 12 months, including new international services launching from Astana to Bangkok in December and direct flights from Astana to Paris in March this year.  Extra frequencies were added from Astana to London Heathrow last June.
This month Air Astana launched new services from Astana to the capital city of Seoul, South Korea and to Tbilisi, Georgia. The service between the capital cities of Kazakhstan and South Korea operates once a week, complementing the existing three times a week service from Almaty to Seoul.
Air Astana commenced regular flight operations on 15 May, 2002 and currently operates a network of 64 routes between 39 international and domestic destinations.  Air Astana operates a fleet of 30 aircraft including three Boeing 767-300ER, five Boeing 757-200, thirteen Airbus A320 family aircraft and nine Embraer E-190. Air Astana became the first carrier from Russia, the Commonwealth of Independent States (the CIS) and Eastern Europe to be awarded the prestigious 4-Star rating by Skytrax in its World Airline Awards 2012 and was named The Best Airline in Central Asia and India.  Both accolades were repeated in 2013, 2014 and 2015. In February 2015, Air Astana received the prestigious Air Transport World Market Leader Award.