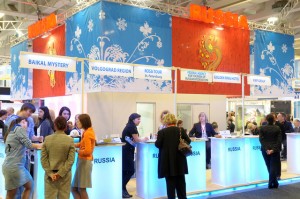 In 2013 Russia’s foreign travel market reported booming sales, whereas this year the travel market has lost. The devaluation of the rouble has led to foreign travel costing around 20 per cent more. In spite of this Russian citizens remain keen to travel. These are the findings of the annual ITB World Travel Trends Report, conducted by IPK International and commissioned by ITB Berlin, the world’s leading travel trade show. The forecasts are good for the Russian travel market in 2015, despite expecting slower growth than in previous years.

In the first eight months of this year the number of foreign trips undertaken by Russians fell by one per cent. This decline is due mainly to an estimated 50 per cent decline in travel to Ukraine, the second most popular Russian destination in 2013. Without the Ukraine as a tourist destination the overall picture improves: at plus ten per cent, Russia’s foreign travel market reported stable growth during the first eight months of this year.

According to the World Travel Monitor® published by IPK International the number of trips to Turkey, which last year was the most popular Russian holiday destination, rose in the order of double digits. During the first eight months of 2014 Greece and the UK also welcomed more arrivals, as did Thailand and the USA, whereas visitors to Spain and Germany declined. One reason for this trend is the devaluation of the rouble which has led to foreign trips costing 20 per cent more. Many Russians are also worried about negative attitudes towards them in Europe because of the crises in the Crimea and Ukraine. Rising inflation and bankruptcy among several travel operators has also had a negative effect on travel behaviour.

Despite the difficult situation the World Travel Monitor® forecasts stable growth for 2015, albeit at a lower rate. 67 per cent of those polled said they would take the same number of foreign trips, possibly more, while 23 per cent intended to travel less and ten per cent had no plans for going abroad. Based on these findings IPK International predicts that in 2015 Russian trips abroad will increase by around four per cent which would confirm that the country possesses a stable foreign travel market. With its annual double-digit growth Russia has recently become one of the biggest driving forces of Europe’s foreign travel market. Between 2005 and 2013 the number of trips undertaken abroad doubled, reaching 31.5 million last year, equivalent to a growth rate of 118 per cent.

In 2013 beach holidays in the sun were a clear favourite with Russian citizens. 55 per cent visited beach destinations, while 15 per cent took city breaks and around ten per cent went on round trips. Russian tourists spent more money and stayed longer at their destinations. Between 2007 and 2013 the average length of a holiday increased from 11 to 12 nights, while spending on overnights rose by 35 per cent. More and more Russians tend to book their holidays considerably in advance. The internet has become an increasingly important booking tool and now accounts for about 50 per cent of reservations being made. Nonetheless, at 40 per cent, the percentage of trips booked through travel agencies has remained stable.

All the findings are based on information from papers held at the World Travel Monitor® Forum in Pisa, which is sponsored by ITB Berlin. Every year the consultancy IPK International invites more than 50 tourism experts and researchers from around the world to present the latest statistics and trends in international tourism.

Other results of the January to August 2014 trend surveys conducted by IPK as well as the assessments of more than 50 tourism experts from over 20 countries and the core data of the World Travel Monitor® will be published exclusively by ITB Berlin. Detailed information will be available in the ITB World Travel Trends Report in early December at www.itb-berlin.com. At the ITB Future Day of the ITB Berlin Convention Rolf Freitag, president of IPK International, will present the findings of the World Travel Monitor® for the entire year, as well as the latest forecasts for 2015. The World Travel Monitor® is based on the findings of representative interviews carried out with more than 500,000 people in over 60 global travel markets. It has been published regularly for more than 20 years and is recognised as the most widescale continuous survey examining global travel trends.