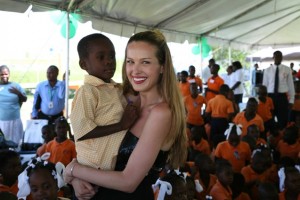 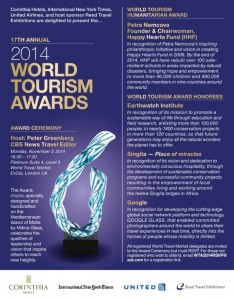 The World Tourism Humanitarian Award is being presented “in recognition of Petra Nemcova’s inspiring philanthropic initiative and vision in creating Happy Hearts Fund in 2006. By the end of 2014, HHF will have rebuilt 100 safe-resilient schools in areas impacted by natural disasters to commemorate the 10th anniversary of the Indian Ocean Tsunami, bringing hope and empowerment to more than 46,000 children and 490,000 community members in nine countries around the world.”

Happy Hearts Fund (HHF) was started by Ms. Nemcova in 2005 as a result of her own personal experience and tragic loss after she survived the 2004 Indian Ocean Tsunami. HHF received its 501(c)(3) status in 2006 with a mission to rebuild safe-resilient schools in areas impacted by natural disasters. HHF works during the gap period when children are forgotten after emergency response is complete, bringing hope and empowerment to ­generations of children and entire communities. Since its inception, Petra has been personally involved in HHF on a daily basis, establishing the structure, vision, and strategy that would position HHF for long-term success.  Petra’s personal experience of survival in the Tsunami helps her understand and connect with the children and community members being helped by HHF.

Petra Nemcova expresses her mission in this way, “we can’t control nature, but we can control the actions we take!”

Petra Nemcova, as an internationally famous supermodel, is currently an ambassador for Chopard & Clinique brands. She is also the founder of the home decor brand, Be The Light New York, which is inspired by treasures from her travels. As a philanthropist, in addition to the Happy Hearts Fund, she currently serves as an Ambassador at Large to Haiti.

The Award itself, Inspire, was specially designed and handcrafted on the Mediterranean Island of Malta by Mdina Glass, and celebrates the qualities of leadership and vision that inspire others to reach new heights.

About the World Tourism Awards
The World Tourism Awards, celebrating its 17th Anniversary, are presented annually at World Travel Market sponsored by Corinthia Hotels, International New York Times, Reed Travel Exhibitions, and – this year for the first time – United Airlines. It was inaugurated in 1997 to “recognize individuals, companies,  organizations, destinations and attractions for outstanding initiatives related to the travel and tourism industry, and in fostering sustainable tourism and developing programs that give  back to local communities.”