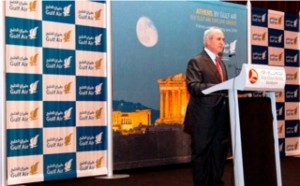 The Ambassador of Greece to Kuwait and Bahrain, H.E. Dr Theodoros Theodorou, and members of Gulf Air’s executive management team also attended the event alongside travel agents from Bahrain and Saudi Arabia.

Gulf Air Acting Chief Executive Officer, Mr. Maher Salman AlMusallam commented: “As the Kingdom of Bahrain’s national carrier we play a key role in supporting our Kingdom’s on-going economic growth and strengthening strategic ties with key global destinations. As such, events such as these are important in enabling greater tourism and business movement between Greece and, not only Bahrain, but the greater Middle East region.”

Speaking at the event, H.E. Dr Theodoros Theodorou, the Greek Ambassador for Kuwait and Bahrain, said: “I thank Gulf Air’s executive management for facilitating this travel agent networking event to help promote Greece in Bahrain and Saudi Arabia. We are excited and look forward to Gulf Air’s re-entry into the Greek market and what positive benefits it will bring to both our countries.”

On the back of Gulf Air’s recent network expansion to key destinations such as Al Maktoum International at Dubai World Central (DWC) and Thiruvananthapuram in India, the airline is seeing unique business and tourism opportunities in Greece alongside positive signs of the country’s economic recovery. Reinforcing the airline’s strategy of strengthening its Middle East and North Africa (MENA) operations while maintaining strategic links to key global destinations and providing key business and tourism links, Gulf Air will resume flights to Athens starting on the 16th of June with four weekly flights.