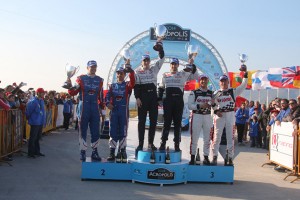 Question to Craig Breen
Congratulations Craig, your first victory in the ERC and the first for Peugeot’s 208T16 – how good does that feel?

CB: “I can’t describe it. It’s been the perfect weekend. We didn’t really know what to expect when we came here. Of course we have done a lot of kilometres in the car over the last year but rally cars have a habit when you put the stickers on of doing this you don’t expect and so it was interesting should we say when we came to the end of the first runs of Free Practice – both myself and Kevin to be fair – to see where our times where and progress from there our speed all day yesterday. Another nice surprise was when we came to the end of the first stage this morning on gravel because we really didn’t have any idea. I kind of came to the end and I was looking up and down to see where and we realised we were fastest so we realised the thing works on gravel as well. It was a really nice day after then.”

Question to Craig Breen
Before the start, what result did you realistically think you could achieve?

CB: “In my heart I wanted to win and my brain was probably saying finish on the podium and try and get the car to the finish but since Free Practice and Qualifying I had a really good feeling with the car on Tarmac and I knew I could drive without taking any big risks on the Tarmac stages. When we found ourselves in the lead yesterday I was feeling confident that if we could have good speed today we could pull it off. Before the event anything was possible but in my heart I was hounding for a victory and what a feeling it would be to win a rally on the car’s debut event and here I am now.”

Question to Craig Breen
You made a reference to the “big man above” at the final stop line. For some people who perhaps aren’t aware can you tell us what you meant by that and also what does it mean to emulate your hero Frank Meagher’s achievements?

CB: “It’s fantastic. For me Frank Meagher’s was my absolute idol, he was all I aspired to and I looked up to him like a god-like figure when I was a kid and walked in gaze what he could have done. So for me to be the next Irish person to win a round of the European championship… we’re a small enough country and we’re on our knees at the minute so it’s nice to take some good news back there. But even more especially for what’s happened to me in the last couple of years I can even remember myself and Gareth in Sicily asking ourselves how do we get on the pace of these boys, how long’s it going to take until we can be leading one of these events. I can remember on the Friday evening before the accident saying if we can just keep plugging away we’ll get there some day because we’re not too far away. A couple of years later and here we are, it’s an amazing feeling and it’s a big thanks to everyone who’s involved. Scott joined me at the start of the year and, low and behold, our second event with the Peugeot Rally Academy and we’ve got a victory. Hats off to him, he’s done a fantastic job. Everybody behind the scenes who has been there for me the last while, to get this victory now is all paying off.”

Question to Scott Martin
Not a bad result for your second event with Craig. Can you describe his performance?

SM: “Amazing. It really, really was amazing from the very first run on the Free Practice until where we are now. It’s been a faultless drive, the car has run virtually faultless. Some small little issues we had to monitor and keep on top of but as Craig said it’s our second ERC rally, we did Sweden as well and our third rally together to win the Acropolis Rally is something I didn’t think would happen for a long time. And even if it would happen there’s always a question mark. It’s been a great weekend and the team has done a fantastic job to get the car here and on time because that was testing if the car was going to make it from all the rumours. But it’s been a great weekend and hopefully we’ll kick on from here.”

Question to Scott Martin
Your team-mates Kevin Abbring and Seb Marshall were leading after four stages. How confident where you both that you could have caught them had it not been for their problem?

Question to Craig Breen
What do you reckon Craig?

CB: “Hats off to Kevin. He done a fantastic job out of the box and was really on fire from the word go. But I couldn’t let him think that he would have won the rally – that would be the last thing I would want. We would have had a fair stab because I had a very good feeling on gravel and like Scott, we would have won.”

Question to Bryan Bouffier
Are you happy to be second or disappointed not to have won?

BB: “To be honest I’m a bit disappointed. My target as usually is to win and I did quite a lot of mistakes this weekend. But really the positive point is we discovered the car in the shakedown so in this situation it’s quite difficult. And also this morning we discovered the car on the gravel and finishing second we have to be happy with this result.”

Question to Bryan Bouffier
What are the chances of more ERC appearances this season?

BB: “My target is to go to Ireland to beat Craig.”

CB: “They stop him at the passport office and send him back to France!”

BB: “My Irish accent is not good enough that I need to show my passport?!”

BB: “For sure my target is to go to Ireland and then we will see but for sure it’s much better than in Latvia that we can score some points for the championship and now we need to push for the budget to do more events and maybe we can do a good result at the end of the year.”

Question to Xavier Panseri
It was quite a battle between you and Kajetan Kajetanowicz and Jarek Baran for most of today. What was it like inside the car? XP: “First of all it’s a big battle with Kajetan and Jarek but it’s not the first time because we are battling like this for six years. Like Bryan said we are here for the victory, we made some good times but we made some mistakes also so we were obligated to push and be on a battle with Craig and Kajetan.”

Question to Xavier Panseri
Given your experience of international competition, how would you rate this year’s Acropolis Rally?

XP: “The organisation is really good, the service park and stages are amazing. Maybe we can tell the Tarmac stage are a little too fast, not enough rhythm change, maybe one or two more narrow and tricky Tarmac stages would be good. But the gravel stages were amazing, perfect.”

Question to Kajetan Kajetanowicz
A great result for you Kajetan, but why did your fight with Bryan not last until the finish?

KK: “As Xavier told you about our fight five or six years but we are not so old! It was incredible rally for us, same situation like yesterday, for us it was really good and fast stages so much emotions, we are happy like always after a rally if we are on the podium.”

Question to Kajetan Kajetanowicz
How pleased were you with your performance on this rally?

KK: “Of course. The stages are very difficult because they are very demanding and look completely different than in Poland and that is the problem for me and that’s why I am happy to be here with these guys like yesterday.”

Question to Jarek Baran
We asked Xavier about the battle for second place. From your perspective how dramatic was it in your car?

JB: “In fact it helps us to fight Xavier and Bryan because we know each other very well but we also know Bryan is very fast on the second lap. We tried to calculate on the middle day service what we can do.”

JB: “Or what we can lose. The co-driver in third place is the last one in the press conference but still in front of the co-driver of car number four overall. As Xavier said it was hard day especially today because I don’t expect the stages to be so clear. I have past experience of two Acropolis Rally, okay six years ago, but they were more rough. These stages were more clean but the conditions were still hard and we could push a bit more on that flat surface, which makes it a very hard job for the co-drivers. Yesterday it was very fast and it was not easy to manage with the notes on those fast stages.”

Question to Jarek Baran
When will we see you and Kajto next competing in the ERC?

Question to Kajetan Kajetanowicz
But you can tell us because there are only friends in here?

JB: “We are so sorry, we analyse because we want to take the best idea, the best solution for the next two rallies, probably Ireland and probably Azores but we cannot say definitely today. We can calculate our time.”

Question to Craig Breen
Up next in the ERC is the Circuit of Ireland Rally. How much would a ‘home’ win mean to you?

CB: “Like you wouldn’t believe. I’ve actually never won a big international rally in Ireland even so this is my first international rally win. So I’ve never had the satisfaction of winning a rally in front of my home crowd. I’m going to give it everything I can. We’re very fortunate Peugeot Ireland have given us the opportunity to drive next week in a national rally so we will do some practice, albeit completely on the other side of the country although it’s a small country so it’s not that far away. We will do a test there and the rally and bring on the Circuit of Ireland. There are some really fantastic roads ahead. Bobby [Willis] and all the team have done a massive effort to find the best stages from what I hear. I’m really, really looking forward to that. A home victory would be more than the icing on the cake. That’s our next target.”