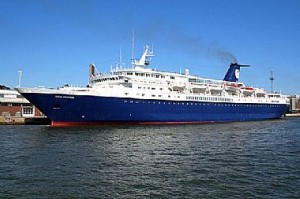 Majestic International’s OCEAN COUNTESS, which first appeared back in the seventies as the CUNARD COUNTESS, was reported to be ablaze at her lay up in Chalkis Shipyard, Greece.

The cruise ship was last under charter to the UK company Cruise & Maritime Voyages. She had been laid up last year after her final cruise call to Liverpool.

Five persons aboard her at the time safely evacuated, Greek press reports and there have been no casualties.

Launched for Cunard back in 1974 in Copenhagen, fitted out in Italy, the ship as CUNARD COUNTESS saw service in the Falklands conflict in 1982, being chartered by the MoD for troop movements.

Cunard sold her in 1996 to Awani Cruises but they got into difficulties and sold her in 1998, going to Royal Olympic cruises as Olympic Countess. Louis Cruise lines chartered her from 2004 and it was in this year she gained the name OCEAN COUNTESS. She was chartered by Cruise and Maritime in 2010.

The extent of the damage appears to be extensive as the vessel had been ablaze for many hours.