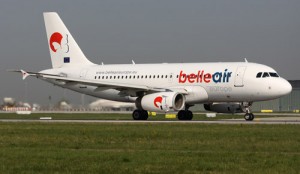 According to Bloomberg, hundreds of the airline’s passengers have been left stranded in Tirana and neighbouring countries after the airline was grounded.

According to the report, Albanian economy minister Arben Ahmetaj said Belle Air, which is based in Italy, owes tax authorities €4.8 million.

The airline’s website was not allowing new bookings, instead bringing up an error message.

Belle Air was established in 2005 as a low-cost carrier, starting operations in 2006. The airline is based in Italy and offered flights to 26 European destinations from Tirana, according to its website.

Its subsidiary Belle Air Europe was founded in 2009 and offered flights from Kosovo and Macedonia. According to its website, its network included flights from Pristina to Verona, Bergamo, Venice, Munich, Stuttgart, Dusseldorf, Liege, Basel-Mulhouse, London, Friedrichshafen, Nuremberg and Vienna, in addition to services from Skopje to Dusseldorf, Vienna, Ancona and Rome.