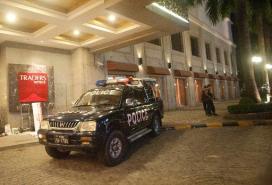 An explosion struck one of the most prestigious hotels in Myanmar’s main city just before midnight Monday, ripping apart a guest’s room and wounding one American — one in a series of unexplained blasts to hit the Southeast Asian country in recent days.

It was followed by two small explosions before dawn Tuesday in the Mandalay region, police said, adding that there were no reports of injuries.

The cause of the blast in the 22-story Trader’s Hotel, located in the heart of Yangon, the country’s commercial capital, was not immediately clear.

It blew out a window in the guest’s 9th floor room, shooting shards of thick glass more than 30 metres (yards) into the street, but there were no other visible signs of damage to the exterior of the building.

The device apparently went off in the guest’s bathroom, scattering towels, toiletries and a red purse across the entrance way floor. A chair was overturned and part of the wooden wardrobe lifted off its hinges and lying on the ground.

A 43-year-old American woman was slightly injured and taken to a Yangon hospital, police and hotel staff said. Her husband and their two children, aged 5 and 7, were unhurt.

A dozen police and heavily armed soldiers with a sniffer dog entered the glitzy hotel soon after the explosion. Later, many of them crowded into the destroyed room, blocked off with yellow security tape, to inspect the damage.

Traders’ general manager Phillip Couvaras said in a statement that the hotel, part of the Shangri-La group, was working with authorities to investigate what happened.
But “because this is an active police investigation we cannot comment further at this time,” he said. “The safety of our guests and staff are our highest priority and we are obviously monitoring the situation.”