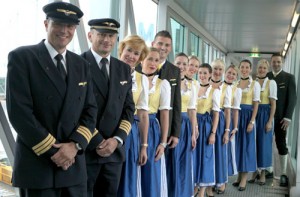 Oktoberfest on board of long haul flights to New York, Chicago and Tokyo

With Oktoberfest, Munich heralds its fifth season, because for over 200 years this traditional event shifts between summer and fall. Lufthansa is ready to join in that legendary happening – which is linked to special Bavarian costume: women are dressed in Dirndl, men in leather trousers, waistcoat and jacket.

Every year complete “Oktoberfest-Crews” take off from the Bavarian capital to destinations in the USA, Asia or the Middle East. This year New York, the city of fashion was first. Twelve female flight attendants and two male attendants presented the special “Bavarian uniforms”. The “Wiesn-Dindl” came along in Lufthansa’s brand recognition colors yellow, blue and white. The women’s bodices were yellow and showed blue flowers, the skirts were striped in blue and silk pinafores completed the outfit. The male attendants appeared in Bavarian leather trousers with proper jackets, waistcoats and ties that were in line with the Dirndl.

With its flight attendants in Bavarian costume, Lufthansa is continuing a tradition that is nearly as old as the airline itself. It was more than 50 years ago that Lufthansa flight attendants first exchanged their uniforms for traditional Bavarian dress. In 1957 the Airline announced: „Lufthansa-Stewardesses in authentic Dirndl-dresses will take care of passengers from New York to Hamburg and from London to Munich.” On these reaches, blond-haired flight attendants wore light blue Dirndl; dark-haired women were dressed in rosy outfits. After a hiatus, the custom was picked up again in 2005 – with great success. Therefore a new dirndl is designed for Lufthansa every three years by a regional company. In past years the outfits have been designed by Gwandhaus Gössl and Loden-Frey. Since last year “Angermaier Trachten” is the official outfitter for the Lufthansa crew.

Also because of the particular mood that goes along with the event, people all over the world are fascinated with Oktoberfest. That works on board as well: The crew is not only an eye-catcher, but the extraordinary atmosphere contributes to the pleasure and well-being of passengers. Enough reasons for the “Oktoberfest-Crew” to take-off again this month: Next destinations are Chicago and Tokyo.