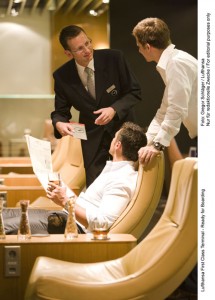 Over the past ten months, 18 million passengers from over 100 countries have participated in the world’s largest aviation passenger survey and have recognised Lufthansa’s First Class lounges as the best in the world. The airline has also been voted “Best Western European Airline” and “Best Transatlantic Airline”. Dr Reinhold Huber, Senior Vice President Product & Marketing, received these prizes on Lufthansa’s behalf at the World Airline Awards, hosted at the Paris Air Show in Le Bourget.

Especially the Lufthansa First Class Terminal at Frankfurt Airport received top marks in the survey. Also the First Class Lounges at the hubs Frankfurt and Munich were highly ranked by customers. According to the assessing institute Skytrax this reflects the high standard and service of the facilities. The fact that additionally Lufthansa was awarded best airline in Western Europe and on transatlantic routes was a clear sign that Lufthansa standards were satisfying customers, Skytrax stressed.

“We are working hard to make our customer services even better and even more comfortable. These awards are further confirmation of the investments we have made in the passenger experience and in our employees’ training. With our exclusive First Class Terminal in Frankfurt, we offer a tailored premium service on the ground – we are delighted that our guests appreciate this,” said Harro Julius Petersen, General Manager for Greece and Cyprus. “We are investing around one million euros a day in the refitting of our new Business Class alone. We have made significant improvements to our in-flight meals and have opened a large number of new lounges on the ground. We are currently in the process of expanding our entertainment service, and innovative products such as FlyNet – which we are the only airline worldwide to offer on long-haul flights – round off our range of services. We have a clearly defined goal: to become the first Western Five Star Airline by 2015. We still need our fifth star in Business Class to get there, and that is what is driving us forward,” Petersen added.

This customer survey was handled by the airline quality assessment institute Skytrax, an aviation specialist. The study examined over 40 different customer satisfaction and service quality issues for each airline. It focused equally on the airlines’ in-flight experience and their airport services. Skytrax has carried out this independent study every year since 1999.