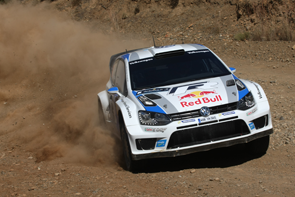 2013 Acropolis Rally has kept its promise of being the toughest event of the World Rally Championship. After three days of harsh fight on the mountains of Peloponnese, 36 crews managed to finish at Loutraki. Jari-Matti Latvala – Miikka Anttila, with their VW Polo R WRC, proved to be the top combination. The Finns managed to have their first win of the season in the 6th round of the Championship, being also the first with VW, while this is the 8th time that the crew stands on the top position of the podium.
Jari-Matti Latvala made his counter-attack early in the second day by pushing, the up-to-then leader, Evgeny Novikov (M-Sport Qatar WRT), who made a mistake and left the road clear for the Finn. At this point, Danis Sordo, with a Citroen DS3 WRC of Citroen Abu Dhabi WR, tried to take the lead but Latvala was far ahead. In fact, the Spanish admitted that his opponent was faster than him and decided early in the run to slow down and opt for the second position. The only concern of Sordo was Thierry Neuville who was behind him and finally managed to constrain him to the third position. The young Belgian drove wisely, avoided the problems, took no risk for the majority of the special stages, and gathered the points for the podium not only for himself but also for Qatar M-Sport.
A great fight was also for the 4th overall position between Andreas Mikkelsen and Nasser Al Attiyah which was determined in just the last day of the rally. Finally, the young Norwegian with the third VW Polo R WRC took the lead by setting the fastest time in 3 out of the 4 special stages (his first with the German team) and finished 4th.
Mads Ostberg finished 6th followed by Martin Prokop and Mikko Hirvonen.
Evgeny Novikov, the big star of the rally until the suspension of his Fiesta was damaged, and the leader for the Drivers’ Championship, Sebastian Ogier, completed the list of the top ten positions of 2013 Rally Acropolis. The French, who abandoned during the first day due to fuel pressure problems of his VW Polo R WRC, apart from the points of the 10th position won also the 3 points of the Power Stage where he easily prevailed.
In WRC-2 the big winner was Robert Kubica who had his first victory in the WRC, especially in the demanding Acropolis Rally.
In the JWRC Category, where all contestants fight with a Ford Fiesta R2, the Spanish Jose Antonio Suarez finished first followed by Pontus Tidemand.
With the eyes staring at the next organization for the celebration of the 60 years of the Acropolis Rally, the Prize Giving Ceremony was concluded in the most official way, with the presence of FIA President, Jean Todt, who congratulated each and every top driver on the podium of the 59th Acropolis Rally!