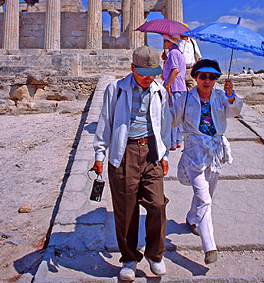 Japan’s tourism industry took a sharp downturn in the aftermath of the tsunami and nuclear crisis that hit the country in 2011.
A new report from Timetric suggests a solid recovery for the country’s tourism industry although fears of natural disasters and the strong yen could limit the expansion.

Over the past few years, Japan’s tourism industry has faced numerous challenges. In March 2011 Japan’s tourism industry took its steepest downturn to date when the earthquake, subsequent tsunami and nuclear crisis hit the country. The earthquake and tsunami caused severe damage to the transportation network, including road, rail and air transport infrastructure, disrupting services at several locations. With the cancellation of more than 560,000 room bookings in the month after the earthquake, the Japanese hotel, travel and tourism industry took a major hit. The strengthening of the Japanese yen, combined with concerns over the nuclear disaster, further reduced international travel to Japan.

New research from Timetric suggests a strong rebound, with international arrivals growing by 34.6% reaching 8.4 million at the end of 2012. By 2017 inbound tourist arrivals are expected to reach 11.0 million, expanding at a CAGR of 5.7%. The key drivers for this growth will be improved economic conditions and the government’s efforts to promote Japan as an attractive tourist destination. The volume of domestic tourists is also expected to grow, increasing at a CAGR of 1.68% reaching 330.9 million by 2017. Outbound tourism is expected to grow from 18.5 million outbound departures in 2012 to 21.9 million in 2017, rising at a CAGR of 3.77%

Fears of natural disasters and the strong yen could limit growth

Japan is situated on the intersection of various continental and oceanic plates causing risk of earthquakes, tsunamis and typhoons. Negative travel advice, due to the risk of natural disasters, issued by the travel boards of several countries to their residents, could potentially damage the attractiveness of the country as a tourist destination. Furthermore, the rising value of the Japanese yen is a concern for the Japanese travel and tourism industry. The strong yen makes Japan an expensive destination for inbound tourists, and it also means that many Japanese people can afford to holiday abroad, making outbound travel more attractive than domestic travel.

The Timetric report; ‘Travel and Tourism in Japan to 2017 – Post Tsunami and Nuclear Crisis, Tourism Sector to Witness Steady Growth’ was published on the 30th April 2013.