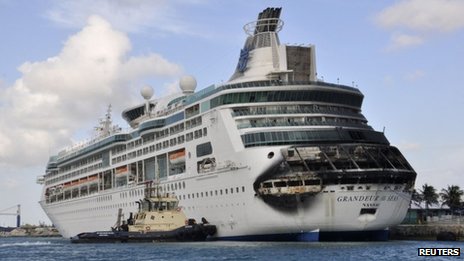 A fire has broken out aboard a Royal Caribbean cruise ship, forcing more than 2,200 passengers to end their trip early.

The Grandeur of the Seas had left Baltimore on Friday and was en route to CocoCay in the Bahamas when fire broke out in the mooring area in the early hours of Monday, the company said.

More than 2,200 guests on board the ship had to go through the emergency drill in the early hours of Monday morning when the fire broke out on a mooring deck.

They were woken just before 3am and were ordered to put on life jackets and go to their muster stations.

The 2,224 guests and 796 crew were all safe and accounted for, Royal Caribbean said in a statement.

The 17-year-old ship never lost power and was able to sail into port at Freeport, Bahamas. Charter flights are now being arranged to return passengers to their starting point in Baltimore, the US.

Passengers are being refunded their fares and offered a free cruise in the future, the company said.

After assessing the damage, the cruise line decided to cancel the rest of the cruise and cancel the next sailing which was due to leave on Friday (May 31).