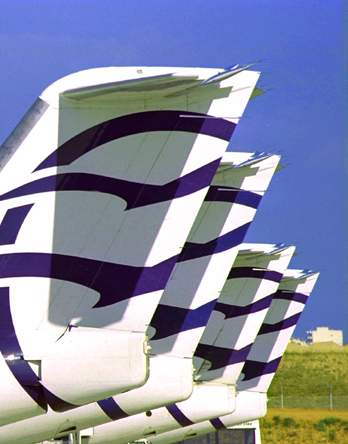 Revenue for the first quarter of 2013 reached €115.9m, 11% higher compared to the same quarter of last year. Pre-tax losses narrowed to €8.2m compared to losses of €31.2m in 2012. Higher load factors in international routes and further cost management efforts were the main contributors to the improvement.
Net result after taxes was a loss of €1.2m against losses of €25m in 2012, given the additional positive impact of a €5m rise in deferred tax assets, derived from the increase in tax rate to 26% from 20%.

AEGEAN carried 1 million passengers in the first quarter of 2013, achieving an increase in its average load factor to 70.5% from 65.3%. Passengers on international flights reached 585 thousand, rising by 7% versus 2012. Domestic traffic fell by 13%, with average fares declining by a further 9% for a fifth consecutive year as a result of declining local GDP.
Cash and cash equivalents reached €160m as of 31.03.2013.

Mr. Dimitris Gerogiannis, Managing Director, commented:b“Our international network gradually matures allowing us to at least partially cover the loss from declining domestic demand and activity. We will continue to invest on strengthening our international network by cautiously adding more destinations. In the summer season of 2013, AEGEAN will operate more than 158 international routes, both from Athens and its 8 regional airport bases. We look forward to the economies of scale from the acquisition of Olympic Air so as to strengthen our competitiveness and be able to secure a gro