Αρχική Cruises Norwegian Breakaway will light up the night with captivating fireworks show on... 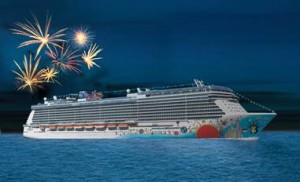 Norwegian Cruise Line is starting off 2013 with a “bang” by announcing that Norwegian Breakaway, the line’s newest ship debuting this April, will feature an exciting fireworks show on every cruise. The environmentally-friendly pyrotechnics display will dazzle guests on the second to last night at sea each week, after the ship departs Bermuda during her summer inaugural season. To view a short animation of the fireworks show, please click here.

Building on the electrifying theme of the ship’s headlining Broadway show, Rock of Ages, the awe-inspiring fireworks will be the grand finale of a decadent 1980s-themed deck party and will be set to a specially-selected playlist of classic 1980s hits by artists like Madonna, Devo and Prince.

“All the incredible entertainment and amenities on Norwegian Breakaway are going to wow our guests,” said Kevin Sheehan, Norwegian Cruise Line’s President and CEO. “We wanted one additional element that would really blow them away and this incredible fireworks show is going to take the cruise to a new level of excitement.”

As guests party the night away at the high-energy party under the stars in the open-air Spice H2O venue at the aft of the ship, they will be transported to the 1980s, where music and fun reigned supreme. In a breath-taking finale, a mesmerising colour-filled fireworks show will light up the night sky, right above the ship. The fully-produced show is a visual masterpiece that is set to a playlist of classic ‘80s hits including “Come on Feel the Noise”, by Quiet Riot; “Whip It”, by Devo; “Cherish”, by Madonna; “Final Countdown”, by Europe; and “Purple Rain”, by Prince. As the fireworks blast to the beat of the music, guests will enjoy an experience unlike anything else offered at sea on New York’s ship.

The 4.000-passenger Norwegian Breakaway will arrive in her year-round homeport of New York City on May 7, 2013. The ship will begin weekly summer 7-night cruises to Bermuda on Sunday May 12, 2013 and the fireworks will be held on the second to last night of the cruise, after the ship departs Bermuda. From October 2013 until April 2014, New York’s ship will offer voyages from the heart of Manhattan to the Bahamas & Florida and the Southern Caribbean.

To date, the company has revealed the ship’s ground-breaking design, including The Waterfront and 678 Ocean Place; a wide range of indoor and outdoor venues on three dynamic decks that will create a whole new complex at sea that enhances guests’ connection with the ocean. Norwegian Breakaway’s entertainment will include three Broadway shows: five-time Tony nominated Rock of Ages; the dance sensation Burn the Floor; and Cirque Dreams® & Dinner Jungle Fantasy. The famed comedy troupe The Second City, Howl at the Moon duelling pianos, and New York’s own Slam Allen will also perform on the vessel. Celebrity Chef and Food Network star Geoffrey Zakarian will also debut his first restaurant at sea on Norwegian Breakaway: Ocean Blue by Geoffrey Zakarian. 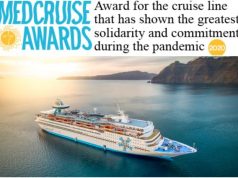 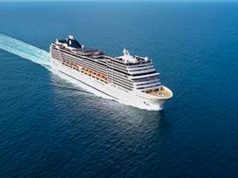