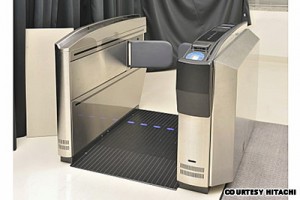 Working with The Nippon Signal Co. and the University of Yamanashi, engineers created a gate that uses high sensitivity mass spectrometry technology to detect the presence of explosive compounds.

Basically, as the passenger swipes their boarding pass on the gate, a short puff of air is blown on their hand to lift and collect minute particles that are then analyzed for explosive compounds.

A similar technology was introduced to U.S. airports in 2005 in the form of puffer machines. However, those machines were pulled after a trial period due to technical difficulties. The puffer machines can process 180 people per hour.

Hitachi claims their new technology speeds things up to process 1,200 people per hour. Their gate can analyze the air particles within 1-2 seconds.

Explosive particles are adhesive by nature and anyone who has handled explosives will have trace amounts stuck to their hands, boarding passes and anything else they have touched.

Departure gates that can detect traces of explosives within a matter of seconds.The high-speed bomb-detecting gate from Hitachi is meant to be one more layer of security to increase passenger safety at airports. The gate can also be adapted for other venues, such as train stations and stadiums.

The announcement of the prototype comes as a survey by SITA was released this week showing that passengers liked automated boarding gates the most out of all the self-service technology available at airports.

The Hitachi prototype will be on display at the Special Equipment Exhibition & Conference for Anti-Terrorism in Tokyo, to be held on October 17-19, 2012. Public tests of the boarding gate are due to begin next year. 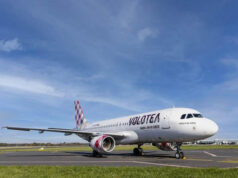