The President of the Hellenic American National Council Mr. Paul Kotrotsios hosted a teleconference on Thursday May 10th in which Council members discussed the upcoming national agenda prior to the PanMacedonian convention that will be hosted in Philadelphia on May 26-27, 2012. Mr. Kotrotsios also invited everyone to participate in the PSEKA convention in Washington on June 6-8, 2012. “We are moving ahead,” Kotrotsios said while added that the PanMacedonian convention will be a great chance for all the members to get together and know each other better as well as be briefed about our national issues. Mr. Kotrotsios also thanked everyone who participated, sponsored or supported the Greek Relief program that came to life from the Hellenic Doctors Association as well as the Hellenic Relief Fund.HANC’s president also welcomed the Cephalonian Federation “Oddyseas” which was added to HANC’s team on April 10 in Atlantic City. Mr. Kotrotsios also spoke about the special relationship that was created between the Greek American community and the Olympic gold medalist Pyrros Dymas who travelled to the United States two months ago under the auspices of the PanHeperotic Federation in order to support his school back in his hometown of Hemara and also united all the people of Epirus. Dimas received an award by the Hermes Expo International in late April. Mr. Kotrotsios also mentioned that Federations and Presidents should all work together for better results and that HANC should work along with all Greek American Institutions and organizations such as the American Hellenic Institute in Washington, DC. “Everyone is much needed,” Kotrotsios said. HANC’s president also discussed the issue of celebrating the Council’s 20th birthday in Washington, DC and asked all the members individually and the Federations to support the project financially in relation to HANC’s convention.

HANC’s Vice President Mr. Chris Christakis said he is ready for the two days in Philadelphia and the main topic of discussion will be the economy as “Greece is in a very tough position,” as he said. Mr. Christakis also mentioned that amongst other speakers the convention will host: Mr. Kyriakos Kontopoulos, Professor at Temple University, Mr. George Tsetsekos, Dean of Drexel University School of Business, Mr. Panagiotis Tsaousis of ING America and Mr. Nikos Ksydakis, editor in chief of “Kathimerini” newspaper. According to Christakis 120 are expected to participate in the convention a number highly increased from last year. On Saturday May 3rd at 3pm, Mr. Christakis will host a panel on the Macedonian name dispute in which the PanMacedonian President Mr. Hatzistefanides will speak along with Mrs. Nina Gatzoulis an expert on the issue as well as members of the PanMacedonian Association.

According to Mr. Ted Spyropoulos, President of the National Council of Greeks Abroad, the Greek lobby needs to approach members of the Congress willing to listen and help with our national issues. “In order for that to happen, we need to financially support these members in order for our work to be more effective,” he said.

Ms. Stella Kokolis, President of the Greek Teachers Federation asked once again for the efforts to keep Greek teachers in America and asked for the creation of a new agenda for Greek education issues. Ms. Kokolis also asked HANC and its members to support George Dimos who’s running for Congress. Mr. Matarangas in charge of HANC’s financial issues as well as Vice President Mr. Kostas Koutrakos made similar comments of help and support. Mr Koutrakos as President of the Pan Laconic Federation said he would support the issuance of a yearbook that would help HANC’s finances. 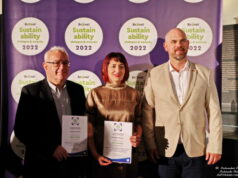 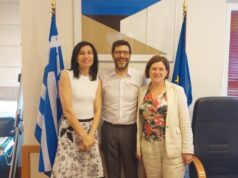 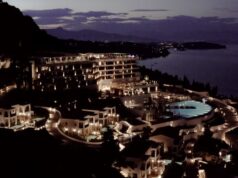