Jeb Corliss (Daredevil) crashed into a boulder on Table Mountain at 120 MPH in January. He just released a terrifying video footage of the incident, taken from a number of cameras — including some mounted on his own helmet. Corliss in a black, Batman esque wingsuit, flies through the air for several seconds, until his foot touches a boulder on his lightning-fast descent. The video shows Corliss releasing a safety parachute right after impact. On site observers say that’s what saved his life. Corliss has jumping from the Eiffel Tower in Paris and the Petronas Twin Towers in Kuala Lumpur, where he broke both legs in the accident. He’s been recuperating in a hospital in California since but is due to be released this week. 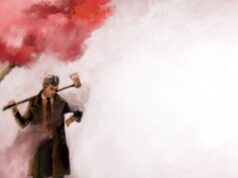