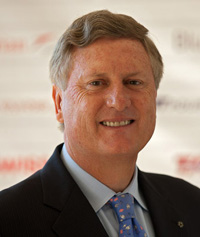 “With Mark Schwab we have secured an internationally renowned airline executive, who has all the qualifications required to lead our alliance into the next chapter of its success story,” said Rob Fyfe, Chief Executive of Air New Zealand and Chairman of the Star Alliance Chief Executive Board.
“This appointment follows a worldwide search resulting in the comfortable situation of having several high calibre candidates to choose from. Mark convinced us with his vast industry know-how and his tremendous international experience. Having served our business in several executive positions across the globe gives him that specific background that we need for this challenging position”.

Mark Schwab held numerous executive positions in the airline industry at United Airlines, US Airways and American Airlines. He began his aviation career in 1975 with Pan American World Airways in Rio de Janeiro.
As a global citizen he spent most of his career outside his home country, the United States of America. Schwab headed organisations in Latin America, Europe and Asia. Being fluent in Portuguese and in Spanish language he holds a bachelor’s degree in Latin American affairs from the University of Virginia, Charlottesville.
Mark Schwab is married and has two daughters.

The Star Alliance Services GmbH, based in Frankfurt, Germany, serves as the central organisation of the world’s most experienced airline alliance. It coordinates the projects and activities of its 28 member airlines, aiming at improving the seamless service experience for its international customers when travelling on any of their more than 21.000 daily flights as well as achieving synergies beyond the members’ individual capabilities on a global scale.