Good news for European tourism: despite continuing economic turbulence European tourism industry figures are up. These are the findings of the ITB World Travel Trends Report, compiled by IPK International and commissioned by ITB Berlin. The figures are based on extracts from the European Travel Monitor and World Travel Monitor as well as on assessments by more than 50 tourism experts and scientists from around the world.

According to the findings, a year-on-year comparison shows that trips out of Europe have increased by four per cent. Economic uncertainty in many European countries has not affected travel spending, which has risen by two per cent.

According to UNTWO, from January to August 2011 international trips to Europe rose to 671 million, an increase of 4.5 per cent. The forecast for next year is positive too. In September 2011 travellers from 13 European countries were asked whether and how often they intended to travel next year. 43 per cent said they would be travelling as often in 2012 as this year. 27 per cent aimed to travel more. By contrast, 20 per cent said they would be travelling less than in 2011. Overall, IPK’s ‘European Travel Confidence Index’ lies at 103 points for 2012, indicating 2-3% growth next year. This would represent solid growth and would mean a new all-time high number of trips, ahead of the previous record year of 2008.

Martin Buck, director of the Competence Center Travel and Logistics at Messe Berlin: “Despite the difficulties experienced by various eurozone countries Europe’s travel industry has to date made it safely through 2011. In particular, stable prices and easy online booking procedures have ensured that Europe continues to attract international travellers and also remains the world’s leading source market.“

According to the European Travel Monitor, compared with 2010 short-haul trips grew by four per cent and made up 90 per cent of trips overall. An extra three per cent decided to travel long distance. The number of short trips with one to three overnights rose by ten per cent, while figures for longer stays stagnated.

As far as shorter journeys were concerned, respondents among the 13 European nations polled preferred trips to northern, central and southwestern European regions. Due to the political revolutions in countries such as Tunisia and Egypt many tourists avoided North Africa, which suffered losses of 15 per cent. Travel to the Asia-Pacific region stagnated too, due to a drop in trips to Japan following the Fukushima disaster. The winners were North and South America, which together registered a six per cent increase in tourism.

Among European travellers major cities were popular again this year. City breaks were among the most popular form of travel, rising by ten per cent, followed by round trips (eight per cent) and beach holidays (six per cent). By contrast, trips to rural regions and ski holidays fell by seven and five per cent respectively. European travellers clearly like to save money getting to their destination: low-cost flights rose by ten per cent, while traditional air travel suffered a four per cent drop.

Bookings by smartphones have made no significant impact to date. Only three per cent of European travellers said they used mobile devices to make their travel reservations. 97 per cent of internet users booked their trips via a PC or laptop. As far as booking accommodation is concerned, online reservations (63 per cent) have now already overtaken bookings by telephone or in person (37 per cent).

Details of European travel trends will be presented by the ITB World Travel Trends Report, which will be published in early December at www.itb-berlin.com. The report is based on the assessments of 50 tourism experts from 30 countries, on a special IPK International trend analysis undertaken in leading source markets, and on core data supplied by the World Travel Monitor®, recognised as the largest continuous survey of global travel trends in some 60 source countries. The findings reflect trends which emerged during the first eight months of 2011. At the ITB Berlin Convention Rolf Freitag, CEO of IPK International, will present the findings for the entire year, as well as the latest forecasts for 2012. 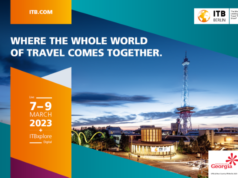