One of Lufthansa’s Airbus A380s is now the proud bearer for the first time of the name of “Wien“. The naming ceremony, attended by 250 invited guests, was held at Vienna Airport shortly after the mega-jetliner’s early-morning arrival in the Austrian capital.

After opening remarks from Stefan Lauer, the Vienna Mayor Dr. Michael Häupl poured sparking wine over the giant plane before unveiling the name of “Wien” emblazoned in elegant lettering on the aircraft’s huge fuselage. Following completion of the naming ceremony’s official and symbolic activities, the guests of honour boarded the oubledecker aircraft to enjoy a closer look at the cabin and its design. Lufthansa’s new flagship left already that evening on a scheduled flight from Frankfurt to Johannesburg to begin carrying its new name around the world.

The newly named A380 “Wien”, registration D-AIMG (known internally as “Mike Golf“ after the last two letters), has been in service since May and has meantime logged around 1,500 flying hours on about 330 flights in the Lufthansa timetable. The “Wien” attracted particular attention on 7 May when circling Hamburg in formation with the legendary oldtimer Ju52, operated by the Lufthansa Berlin Stiftung, to mark the 822nd anniversary of Hamburg harbour. Together with the entire Lufthansa A380 fleet, the “Wien“ is based at Frankfurt Airport, from where it flies on scheduled services to all the aforementioned destinations.

Passengers from Austria fly into Frankfurt to board connecting flights to any of
the A380 destinations. In the coming winter timetable, the Airbus 380 will also be flying
daily to Singapore. The Airbus A380 seats 526 passengers in the best and most modern
service classes in the Lufthansa fleet. First Class with eight spacious seats on the upper eck is totally new and the essence of individuality. The world’s biggest Business Class with 98 seats on the upper deck and Economy Class with 420 seats on the main deck offer unprecedented comfort in an impressively roomy cabin interior.

Updates and background information about the world’s biggest passenger aircraft are available on the lufthansa.com/A380 website. 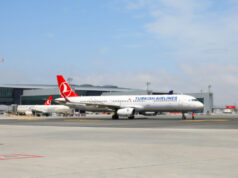