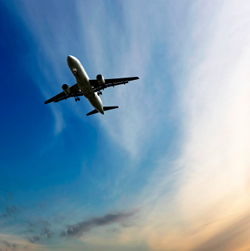 The U.S. Department of Commerce announced that U.S. outbound non-stop air passenger traffic totaled 3.6 million in May 2010, increasing eight percent compared to May 2009 and registering the fifth month over month increase since December 2009. Top outbound markets were Europe, the Caribbean, Asia and Mexico. Air travel was up to the Caribbean, Asia and Mexico, but Europe was down only one percent as air travel began to rebound after the numerous flight interruptions from Iceland’s volcanic ash. Departures were up to South America but down to Central America. The Mexico, Middle East and Oceania regions experienced the strongest growth at 68, 19 and 12 percent, respectively.

U.S. spending in May 2010 by U.S. travelers on foreign carrier passenger fares totaled $2.4 billion (imports), up 19 percent compared to May 2009. For the month, the balance of trade for passenger fares was a $25 million surplus (foreign passenger fares on U.S. carriers [exports] exceeded imports).