Αρχική General Dreams of Olympic tourism could be a nightmare

Research and analysis released on 20th September 2010 by the European Tour Operators Association (ETOA) shows that the vast numbers of foreign visitors anticipated to arrive at previous Olympics did not materialise. No host city has predicted demand for an Olympics correctly. They have invariably over-estimated the number of foreign visitors and the duration of their stay.

ETOA’s study reveals that the nightly usage of hotels during the Olympics varied between 13,000 beds in Athens and 28,000 in Beijing. The number of foreign visitors (including press, sponsors and officials) per night averaged 26,000, 13,000 and 28,000, in Sydney, Athens and Beijing respectively.

For London many in the industry are anticipating a boom, with up to 350,000 foreign visitors predicted per day during the Olympics.  This expectation of bounty creates its own problems. In London, hoteliers expect to be full with premium business, and some anticipate a displacement of demand that fills up the surrounding months.

Availability is restricted and prices rise: a hostile environment for normal tourism.

If huge numbers of Olympic visitors attend, normal guests are displaced. Sports fans’ interests are focussed on whatever sport has attracted them. They have come to attend the Games. They are not interested in “tourism”, they are interested in sport. This impacts the wider service economy of restaurants, shops, attractions and theatres: all of whom depend on tourists. Theme park owners in Los Angeles saw a decline in revenue during 1984. In Barcelona the Costa Brava resorts had a drop in demand and at the Sydney games the normal attractions experienced a downturn in business.

The problem is not restricted to the host city.  London is the gateway to the UK and its biggest draw. If you remove London from a visit to the British Isles, everywhere else becomes far more difficult to sell. Athens has nothing like the central importance that London occupies, yet when its visitor arrivals dropped by 6% in the Olympic year, regional Greece fell by 11%.

These drops in overall visitor numbers indicate a more general problem: the perception that a host city is crowded tarnishes the host country. Visitors tend to stay away for the Olympic year. Already ETOA members are dealing with assertions and assumptions that London (and so the UK) will be so full that it is best avoided. [1]

The Olympics should not be a problem. In Beijing 2008, 28,000 rooms were taken by foreigners, and there were plenty of rooms to spare. London can (and does) absorb this number every day of every month. In August 2009 it attracted nearly 2 million foreign visitors in August. They used the 120,000 rooms available every day. This is the scale of the industry which is at risk if inflated forecasts persist.

Tom Jenkins, ETOA’s Executive Director, says “Precisely because London is one of the top international destinations, it has more to lose. At the moment a false expectation of bookings is in danger of destroying an export industry. For August 2012, ETOA members – who alone regularly deliver over 15,000 hotel rooms per day – cannot reserve space.

Without any reservations to sell, nothing can be sold.

If this applies to the 17 days of an Olympics, then the message for the remaining 50 weeks is that London will be open, like no other city, for normal business.  It is with this message that London must welcome the world.” 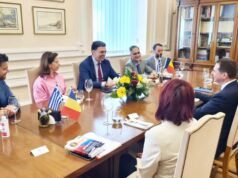