World Travel Market,  was opened pre-registration for WTM 2010.
WTM 2010 will be the biggest-ever World Travel Market as the event builds on the success of last year’s 30th anniversary celebrations with the expansion of its host venue ExCeL, London.
ExCeL, London has undergone a £160 million expansion giving World Travel Market greater flexibility than in previous years.
The expansion of ExCeL, London sees an overhaul of the exhibition floor plan for 2010 with UK & Ireland and a complete Europe and the Mediterranean next to each other in the North Halls (running from N1 to N8).
Africa completes the North Halls with The Americas, Asia & Australasia, Middle East, Global Village and Travel Technology situated in the South Halls.
The state of the art new East Entrance will also re-open for WTM 2010 allowing visitors to enter and depart the venue from both Custom House (West Entrance) and Prince Regent (East Entrance) Docklands Light Railway stations.
World Travel Market Exhibition Director Simon Press said: “The expansion of ExCeL, London is an exciting development for World Travel Market, which had been restricted by the previous size of the venue for a few years now.
“The expansion gives World Travel Market greater flexibility meaning this year’s WTM is set to be the best-ever so pre-register to be a part of the industry’s premier event of 2010.”
Pre-registration is free to all travel and tourism professionals. 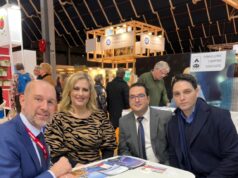