Αρχική Organizations Cameron wants to see the UK in the “top five destinations in...

In a speech today Mr Cameron said the income generated from the £115 billion-a-year tourism sector was “fundamental” to rebuilding the UK’s economy. The UK is now joining Brazil and China in recognising the economical and political significance of the industry.
The Prime Minister would like to develop all Travel & Tourism industry facets such as domestic but also foreign markets. Mr Cameron is particular keen to attract Chinese visitors to the UK and wants to see the UK in the top five destinations in the world.  WTTC representing the world’s foremost private-sector Travel & Tourism businesses welcomes the Prime Minister’s promise to establish a new tourism strategy by the end of the year.
“We are delighted that in challenging economic time the UK government has recognised the importance of Travel & Tourism, an industry that currently generates 3,145,000 jobs or 1 in every 10 jobs in here and can be one of the best and fastest ways of returning back growth, prosperity and increasing jobs. This announcement comes at the right moment for the UK to take full advantage of its Olympic opportunity in 2012. WTTC would be happy to represent the private sector in contributing to the development of the strategy and we hope that more countries around the world will give the industry the value of recognition it deserves” says Jean-Claude Baumgarten, President & CEO of WTTC. The private sector believes a number of challenges and barriers to growth need to be addressed in the new strategy. They include expansion at London’s biggest aviation hub – despite the threat of increasing competition to the title from other European airports – the need for a single European sky, visa processes and procedures, and unfair taxation. 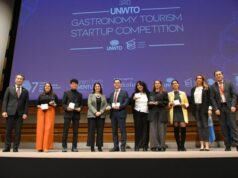